Last of the great stately homes - The Edwardian Manderston House 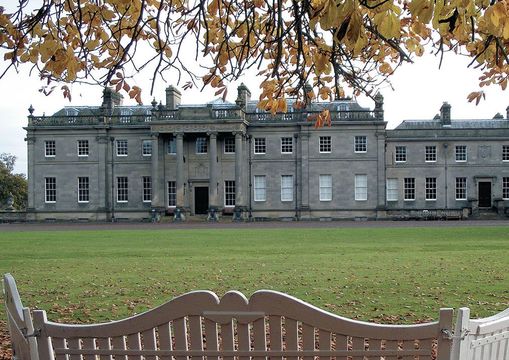 Manderston House in the Scottish Borders, almost completely rebuilt in Edwardian times, is described as being the swansong of that era.

Although Edward VII died in 1910, the Edwardian period is generally taken to cover the period from his accession in 1901 through to the outbreak of World War I in 1914. It marked a move away from the restrictions of Victorian social life.

These days, Manderston belongs to Lord Palmer, an elected peer who sits in the House of Lords as a cross-bencher. (i.e., an independent who does not represent any of the political parties), but the house is a time capsule depicting life as it was in 1905. So much so, that in 2001 the UK’s Channel 4 made a reality TV program there—a three-month-long re-creation of life in Edwardian times. Each individual participant was expected to act out his or her role, while subject to the strict disciplines and divisions between master and servants of the period and where all the “players” knew and understood their place in the hierarchy.

The present Edwardian house, designed and rebuilt in the 1900s by James Kinross on the instructions of the then owner, Sir James Miller, is the epitome of the period’s architecture and quality. That is hardly surprising since, when Kinross asked about his budget, he was told, “It simply doesn’t matter.” Kinross’s response was to create a new north frontage with an elegant portico, and design a sumptuous interior.

In 1893, Sir James had married the Hon. Eveline Curzon, who had been raised at Kedleston Hall in Derbyshire, and Kinross took his inspiration for the hall at Manderston from Kedleston, creating a grand space with an inlaid marble floor, probably designed to impress the new bride and her father as much as anyone else. In fact, the use of large spaces, particularly for anterooms off the main rooms, was a popular Edwardian feature.

The need to impress was never far away however and houseguests were treated to hunting, shooting and fishing expeditions as well as grand balls and receptions. To this end, Manderston has its Ballroom and Drawing Room, two interconnected public rooms. The walls of the ballroom are covered with velvet embossed silk while the curtains are made of gold and silver threads. Until the 1960s, the wall coverings and curtains were stored when the room was not in use, but careful protection from natural light is now deemed sufficient. The luxurious effect is rounded off by the richly decorated ceiling, fireplace and two Italian crystal chandeliers.

Two sets of double doors separate the Ballroom from the Drawing Room, one of three rooms surviving from the earlier house. The structure may be relatively unchanged, but the décor is of the finest quality, with white silk curtains and matching brocade on the walls rounded off with an Adam-inspired ceiling. The embroidered decoration on the three Louis XVI chairs beside the fireplace and the four embroidered chairs opposite were partly the work of Lord Palmer’s great-grandmother and grandmother respectively.

The other focal point for entertaining was the Dining Room, which was the last room to be completed and is the only room on the ground floor to have been redecorated since the rebuilding.

On the sideboard and fireplace mantel are part of a collection, the largest in Scotland, of Blue John urns (a rare semi-precious mineral called after its “bleujuane” coloring), obelisks and candelabra. The long-case clock, made by Andrew Padbury of Bishops Waltham is made of mahogany inlaid with satinwood, while the silver on the dining table was presented to Sir William Miller in 1860 by the constituents he represented in Parliament. The mahogany table itself extends to seat 24 guests on the Chippendale chairs.

Intriguingly, the portraits at the north end of the room are not of family members, having been purchased to give the impression of a long family history. In fact, by Edwardian times an aristocratic lineage was no longer seen as the most important qualification for high society.

The nouveau riche, (the Miller family had made their money in herring and hemp) were becoming acceptable simply because they had the money to fund the country house lifestyle.
Elsewhere, the Morning Room is a completely circular room, with two large windows allowing occupants a suburb view across the garden to the Cheviot Hills when the weather is fine. This room is tasteful, almost feminine in its décor, with what is believed to be an original fireplace providing a link with the House’s Georgian past. Next to the Morning Room is the Tea-Room, furnished with lacquered cabinets, Chinese Chippendale chairs, a long-case clock and matching screen.

The Library was originally intended for use as a writing room, but following the death of Sir James, Lady Miller’s brothers had insisted on it being used as a billiard room, billiards being a popular pastime for Edwardian gentlemen. Along the top of the bookcases are busts of U.S. presidents and one “bookcase” is in fact a secret door to the hall.

Upstairs, the North Bedroom is decorated with crimson damask curtains and matching bedspread. On either side of the bed is a bell pull to summon staff. One is marked “up” and the other “down;” the “up” bell called a maid from the top floor where the female staff lived, while “down” summoned a manservant from the basement.

In the Portico Bedroom, the suite is upholstered with tapestry in the style of Louis XVI and the bell-levers, wall brackets and fireplaces are inset with Wedgwood plaques. The glass-fronted wardrobe was custom-built to give the appearance of more light in the room but it is apparently most unflattering to the figure.

In addition to the house itself, visitors can see the magnificent stables, (Sir James, who was known to his friends as Lucky Jim, owned several racehorses), the dairy and, of course, the gardens, which are at their most colorful during the summer. Lord Palmer’s family owned biscuit manufacturers Huntley and Palmer before it became part of a U.S. conglomerate, and the biscuit tin museum, containing tins from 1868 onwards, is another interesting exhibition at Manderston.

World War I certainly hastened the changes in society, and between the wars fewer and fewer people were willing to go into domestic service. At the same time, many of the landed families found they could not afford to run their great houses in the same manner. After 1945 the system was all but finished. Whereas Sir James employed 22 servants, three part-time staff now look after the house!

Perhaps nothing reflects the changes to the country house system brought about by the Great War and the 20th century as much as the silver staircase. Before the outbreak of World War I, three men would spend three weeks dismantling, cleaning, polishing and reassembling the silver-plated balustrade. After 1918, it remained untouched until 1980 when an Edinburgh couple offered to restore its splendor, and now a team of volunteers see that it is polished three times a year.

Manderston House is about an hour’s drive (47 miles) from Edinburgh traveling south on the A1. From the south, take the A6105, signposted Duns, from Berwick-upon-Tweed.
The House is open on Thursdays, Sundays and Bank holidays from May 9 until September 29, 2013, between 1:30 and 5 p.m.