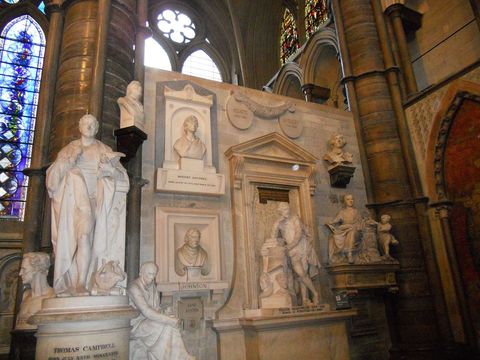 Devoteés of great literature pass by John Andre's monument at Westminster Abbey's Poet's Corner in puzzlement. Yet his death, more than two centuries ago, caused a sensation both in England and the United States.

In Westminster Abbey's Poet's Corner, alongside monuments to the likes of Tennyson, Dryden, Spenser, Shakespeare, and Chaucer, curious visitors can find the name of a minor poet and artist by the name of John André. It is a relatively easy monument to find; a more difficult task for the visitor would be to locate, or even name, any works were written by this nearly forgotten gallant.

André's journey to Poet's Corner began in 1771 when he bought a commission in the Royal Welch Fusiliers. He studied military engineering in Europe until 1774, when he sailed for America to join his regiment, arriving just eight months prior to the outbreak of open warfare between Britain and its North American colonies.

During the war, André forged two relationships that eventually made this aspiring poet and upstart strategist internationally famous. First, he used his personal charm and command of foreign languages to obtain the position of adjutant to the British commander-in-chief, Sir Henry Clinton. On the social side, André spent much of the winter of 1777-1778, during the British occupation of Philadelphia, with a well-placed and attractive Philadelphia loyalist named Peggy Shippen. In contrast to his well-planned professional connections, André seems to have wanted nothing more out of his association with Peggy than the company of a pretty young woman.

The relationship took on dramatic new importance though, when the British left Philadephia in the spring of 1778. Within a few hours of the British departure, a rebel military governor, General Benedict Arnold, took over control of the city. Before long, Arnold and André had a mutual friend in Peggy Shippen.

Arnold's interest in Peggy took a more serious turn than André's and culminated in a proposal of marriage. The governor's relationship with a known loyalist outraged many revolutionary politicians. Arnold further angered Philadelphians by inviting the city's leading loyalists to dinner, and by defending their legal rights.

Arnold would probably have weathered this storm of protests, had he avoided involvement in several schemes to profit personally from his position. Though profiteering was a vice shared by many American officers, it proved a fatal mistake for a man with so many enemies. Constantly attacked in the press as well as in court, Arnold grew estranged from the American cause.

Ever since the British Army left Philadelphia, some of Peggy Arnold's close friends had maintained a secret correspondence with John André and several of his companions. When Peggy told her husband about this unusual line of communication with the British Army, he asked her to send a message to André.

By this time, André had received a promotion to chief of British intelligence services, making him just the person to arrange the General's defection. Arnold learned to his frustration, however, that the very same disrespect from his fellow countrymen that prompted him to offer his services to André, also made André question his usefulness. When Arnold asked André what reward he might expect for his defection, André replied that he should get himself appointed to the command of an army, surrender it to the British, and then talk about a reward. Given Arnold's fall from favour, and a crippling leg wound, a field command was unlikely; so, for a long time, nothing came of Arnold's offer to help the British.

Eventually, an opportunity to surrender something even more valuable to the British than an American army soon presented itself to Arnold. In 1780, he convinced General George Washington to appoint him to the command of the most strategic fortress in America, West Point. In Arnold's secret correspondence to André, he suggested that he might prove his worth by turning over the vital defences to the British.

Arnold and André agreed to meet in person on the night of 20th September 1780, to finalize the plans for the British capture of West Point. Clinton wanted to arrange for the officers to meet openly under some pretext, such as arranging for an exchange of prisoners. Arnold feared such a meeting might arouse suspicions, and preferred to arrange a secret conference with André, whom he desired to dress as a civilian.

A number of attempts to meet on Clinton's terms failed when American officers disapproved Arnold's request to meet with a British officer. Finally, Arnold convinced his co-conspirators that only a secret rendezvous would work. From the moment that decision was made, an almost unbelievable string of bad luck sealed André's fate.

Reluctantly agreeing to the meeting, Clinton insisted that André remains in uniform at all times, though keeping it hidden beneath an overcoat; that he not cross behind the American lines, and that he not carry any military documents. If André scrupulously followed Clinton's instructions, he could not legally be executed as a spy if caught.

The arrangements for the meeting called for André to join Arnold on the west shore of the Hudson River, south of the American lines. Arnold, though, had to rely on unsuspecting dupes to arrange transportation for him. Cleverly, he accounted for his strange nighttime meeting by telling the men a half-truth. He admitted that he was going to confer with a British agent, but reversed his and André's true roles, explaining that the man he was going to meet was a British traitor, who would give him valuable intelligence. If Arnold deliberately picked dull-witted men to accompany him, who were not likely to become suspicious, he outsmarted himself, because when the time came to go downriver to meet André, the boat he had requested was not ready. Delay piled upon delay and by the time Arnold found a boat and two men whom he was able to talk into rowing him down the Hudson, André had been waiting for hours.

The two men conferred out of earshot until dawn when André learned to his horror that Arnold's boatmen, fed up with skulking around all night, refused to row him back to a British ship waiting in the river. André had no choice but to spend the day behind American lines in the house of an Arnold confidant named Smith, and then try to reach the British lines the following evening. André's predicament went from bad to worse. Smith insisted that he remove his uniform, and dressed him in civilian clothes in an effort to smuggle him back across the lines. André also hid messages from Arnold to General Clinton in his sock, thereby doing all three things that Clinton had expressly warned him would be cause for a charge of spying should he be caught.

The next night, Smith, a double agent known to both sides, escorted André towards safety, successfully getting him past several checkpoints. Apparently feeling that the danger was past, Smith then left André to finish the journey on his own. André continued on to within sight of the British lines when three American deserters captured him and discovered the plot.

When news of Arnold's treason spread, the one-time hero immediately became the most despised man in America. Even the British, who stood to benefit greatly from his defection, privately heaped scorn upon him for behaving so treacherously. In contrast, André seemed to draw sympathy from friends and enemies alike. 'There was, in truth, no way of saving him,' wrote George Washington's aide, Alexander Hamilton. 'Arnold or he must have been the victim, and Arnold was out of our power.' Arnold was, in fact, safe in British-occupied New York, having fled West Point before anyone had realized his role in André's mission.

Washington had the spy under lock and key, but he really wanted the traitor, so he pressed Clinton to agree to a trade: 'Major André's character and situation seem to demand this of your justice and friendship. Arnold appears to have been the guilty author of the mischief and ought more properly to be the victim.' Probably everyone involved, except the Arnolds themselves, would privately have been pleased to make the exchange. But Clinton had guaranteed Arnold's safety and was honour bound to keep his word.

Washington, while not eager to execute André, found himself in an equally sticky spot. Without some sort of compelling legal reason, he could not release André without appearing to cave in under British threats.

Consequently, nothing came of Washington's suggestion, and after a week's delay, he ordered André's execution--trembling, witnesses reported, as he did so. On 2nd October 1780, André walked to the gallows, asking everyone present 'to bear witness that I meet my fate like a brave man.' As he died, many of the Americans who had gathered to watch the execution cried. In the 1820s, his body was returned to England, to be reburied in Westminster Abbey, in a spot reserved for illustrious poets.

Arnold lived on until 1801. He was buried in the Church of St. Mary's, Battersea, but a clerk entered the deceased's name into the church records incorrectly, so that when the church underwent renovation a century later, workers had no idea whose grave they had opened when they disinterred him and tossed his body into an unmarked common grave, with dozens of other anonymous remains.