The real history of pilgrim's ship the Mayflower in London 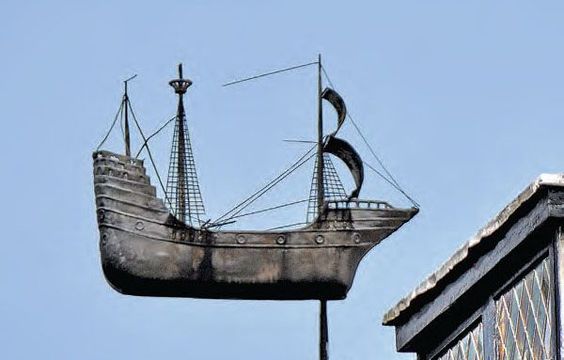 The Mayflower in London.

From Rotherhithe, southeast London, the ship, the Mayflower, first set sail on its famous pilgrim's mission. It's all commemorated on the banks of The Thames.

Between 10 and 12 percent of Americans claim to trace their lineage back to the colonists that sailed from England on the Mayflower in 1620. Conventional wisdom has it that they named their landing place “Plymouth,” after the English town from which they sailed. The truth, however, is that the Mayflower had no more than a passing connection with Plymouth. A good proportion of its passengers were from the East Midlands, and the crew more likely came from South London.

It was from Rotherhithe in South London that the voyage to America really began. And perhaps surprisingly it is where today you’ll find more Mayflower memorials than anywhere else in Britain. So where does Plymouth come into the story?

The place where the emigrants eventually set up a colony had already been named New Plymouth (also known as Plimouth or Plimoth) by English soldier and explorer Captain John Smith of Jamestown fame. The name was one among many based on English counties, towns, and cities used to replace original native names. It first appeared on maps in 1616, four years before the Pilgrims arrived on the Mayflower. Since the place from which they had finally sailed in England was coincidentally also called Plymouth, they elected to retain the name for their settlement.

The ship was contracted and boarded in Rotherhithe, however, from where the Mayflower sailed to Southampton, 150 miles east of Plymouth. Here, more passengers embarked, and the Mayflower was joined by a sister ship called the Speedwell, which had brought emigrants for the trip from the Netherlands.

The Speedwell’s cargo and many of its passengers were then transferred to the already crowded Mayflower, which set sail for the New World for the third time. So, despite its legendary connections with the voyage, the Mayflower might never have had sight of Plymouth had the Speedwell been more seaworthy.

The Mayflower had been built more than 300 miles from Plymouth, in the North Essex town of Harwich, where it was launched and registered. Along with three business partners, the ship was purchased by the man who became its captain. He was Christopher Jones, who lived and was married in Harwich. His small business consortium then ran the Mayflower as a trading vessel.

According to the popular myth, Captain Jones tied up the Mayflower alongside the pub to avoid paying mooring taxes. Today, if you walk down the steps to the left of the pub entrance, you emerge onto the foreshore where a jetty would have taken passengers and crewmen on board.
The area around Rotherhithe in the 1600s attracted many outspoken Dissenters, who refused to conform to the official line of the Anglican Church. These separatists, who had broken away from the Church of England, would have seen a lot of traffic up and down the river as ships left for foreign climes. Add to this the presence of a famous sea captain within their community and it is hardly surprising that he was approached to take the religious rebels to a place where they might start a new life in the New World.

Commemorating the voyage and its crew, a plaque on the wall of the church tower states:

“In 1620 the Mayflower sailed from Rotherhithe on the first stage of its epic voyage to America. In command was Captain Christopher Jones of Rotherhithe.”

Inside the church, another memorial tablet, erected on the occasion of the 250th anniversary of the consecration of the church, states: “The Mayflower. Christopher Jones, Master, and part-owner was buried in this churchyard, 5th March 1622.”

The exact location of the graves of Captain Jones and his business partners is unknown, but in the churchyard there is yet another memorial, this one in the shape of a statue, showing the Mayflower captain holding a small child. He is depicted looking back toward England, while the child is looking forward to America. The statue, which was unveiled in 1995, is by designer and public art sculptor Jamie Sargeant.

Rotherhithe’s final memorial to the voyage of the Mayflower stands at Cumberland Wharf, a short walk along Rotherhithe Street, east of the Mayflower pub. In a corner of this small square overlooking the river, there stands a statue of a Pilgrim and a small boy.

The voyage is shown in a comic strip on one page; the other depicts images of America through the ages since a cowboy, the Statue of Liberty, the Empire State Building, American cars, a U.S. soldier, and more. The Pilgrim is standing ghost-like, reading the paper and pointing to a page over the boy’s shoulder, while a small dog leaps around their feet.
In a further deliberate anachronism, the Pilgrim’s pocket contains a copy of the A-Z street map of London, which (despite not coming into being until the 1930s) is dated 1620. His pocket also contains a crucifix and a lobster’s claw, while various tools—scissors, hammer, pliers, and a paintbrush—are shown at the boy’s feet. The statue was commissioned in 1991, called Sunshine Weekly and the Pilgrim’s Pocket.

The Salt Quay: British gastropub in a converted warehouse overlooking the Thames, famous for its Sunday roast dinners.