Aberdeenshire, Scotland where the quality of life is best 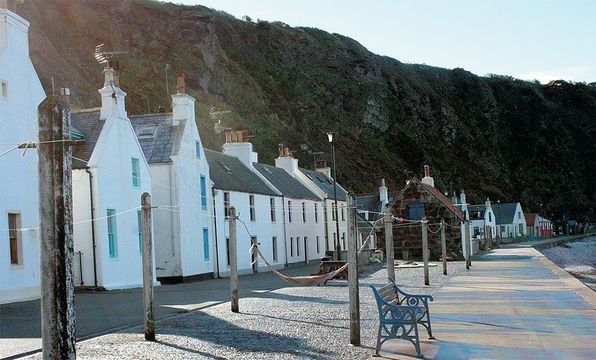 Pennan’s street is quiet these days. Most of its cottages are second homes or holiday lets.

Aberdeenshire was named as having the highest quality of life in Scotland. Yes, there are objective indicators for such a determination: health, education, employment, and such. But what really makes life so great in this sprawling rural county in the far northeast corner of Scotland? Inquiring British Heritage readers want to know. Thus, I decided to go to Aberdeenshire in search of the answer.

The city of Aberdeen itself is the northernmost major city in Britain. Scotland’s third largest metropolis (population about 210,000) is also one of Britain’s more affluent cities, its economy propped by its role as the support center for the North Sea oil fields. Nicknamed the Granite City for the hard, gray building stone of which the city is constructed, Aberdeen boasts a flourishing local culture, a rich history—and of having won the annual Britain in Bloom competition a record 10 times. Ironically, as a city, it comprises its own unitary authority. In other words, Aberdeen isn’t in Aberdeenshire, though the Aberdeenshire County Council and administrative headquarters are located in the city.

So, I landed at Aberdeen’s attractive airport and headed north. The county itself stretches from the Cairngorm Mountains and the valley of the Dee River, where the royal hideaway of Balmoral lies hidden near the village of Ballater, to the North Sea coast. It was a 50-mile drive north from the Granite City to Fraserburgh, a fishing town of 13,000 on the northeastern headland. There at the Fraserburgh Heritage Centre, I got a succinct answer to the question of what makes life great in this part of the world. “It’s the slower pace of life,” said Centre volunteer Tom Thompson. “I moved up from Edinburgh where everything was rush-rush almost a dozen years go, and I just love it here.” Everyone I spoke to echoed Thompson’s affection. 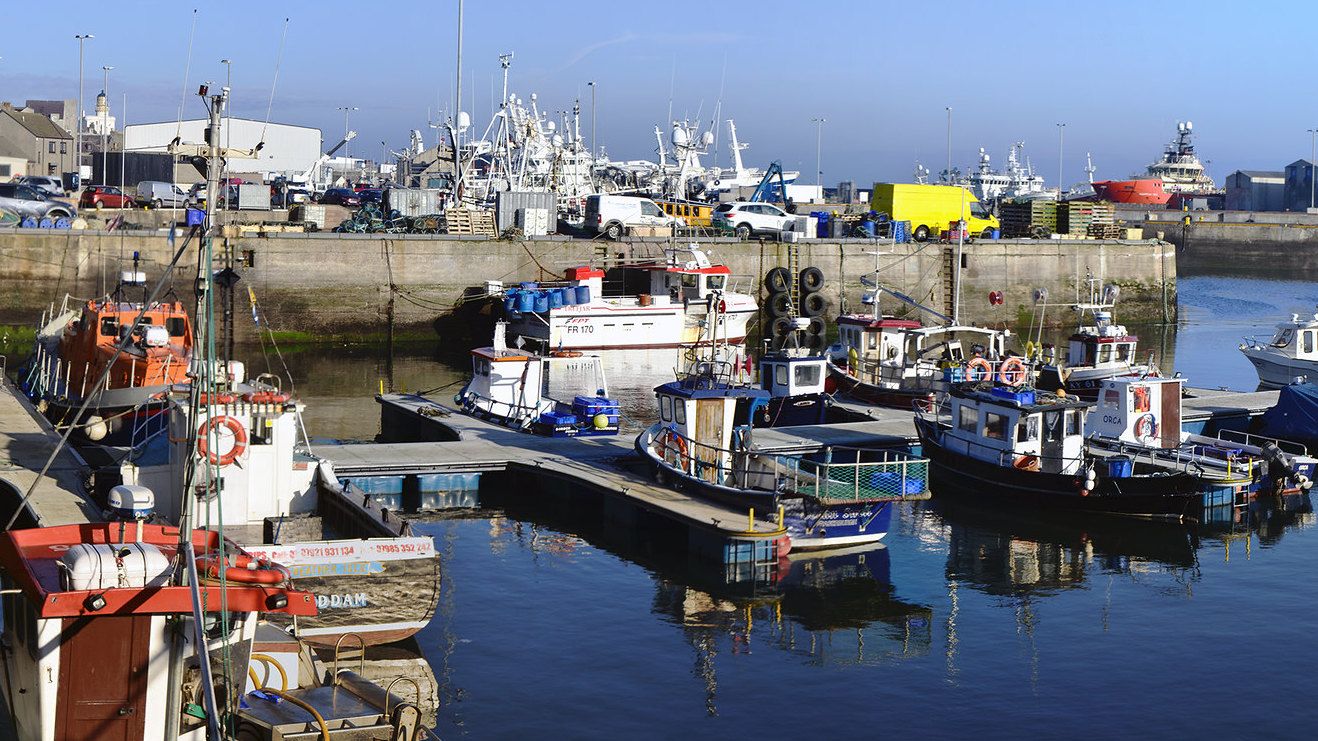 Fraserburgh is a working fishing port, whose rusting commercial fleet in its harbor claims the largest annual shellfish catch in Britain. Of course, working seaports are rarely pretty. But my destination lay farther along the coast a dozen miles to the west: the tiny seaside village of Pennan. It was there 30 years ago that they filmed the enchanting movie Local Hero.

You may recall the story. Burt Lancaster (in one of his last roles) played the president of a Houston oil company. He sends a young executive to a little coastal village in Scotland with instructions to buy the village and all the shoreline. They want to build an oil refinery there. When young Mac (Peter Reigart) arrives, chosen for the assignment because of his Scottish surname, he brings the capacity to make everyone rich. The caveat is, of course, that it will also change their lives forever. The short version is that, in the end, the petrochemical company builds a marine laboratory and an observatory instead. It is a movie about the quality of life.

There in Pennan, I thought, must lie the real answer to my query. What is the quality of life in Pennan today compared to three decades ago when a film crew swept into the one-street harbor village to face the question? 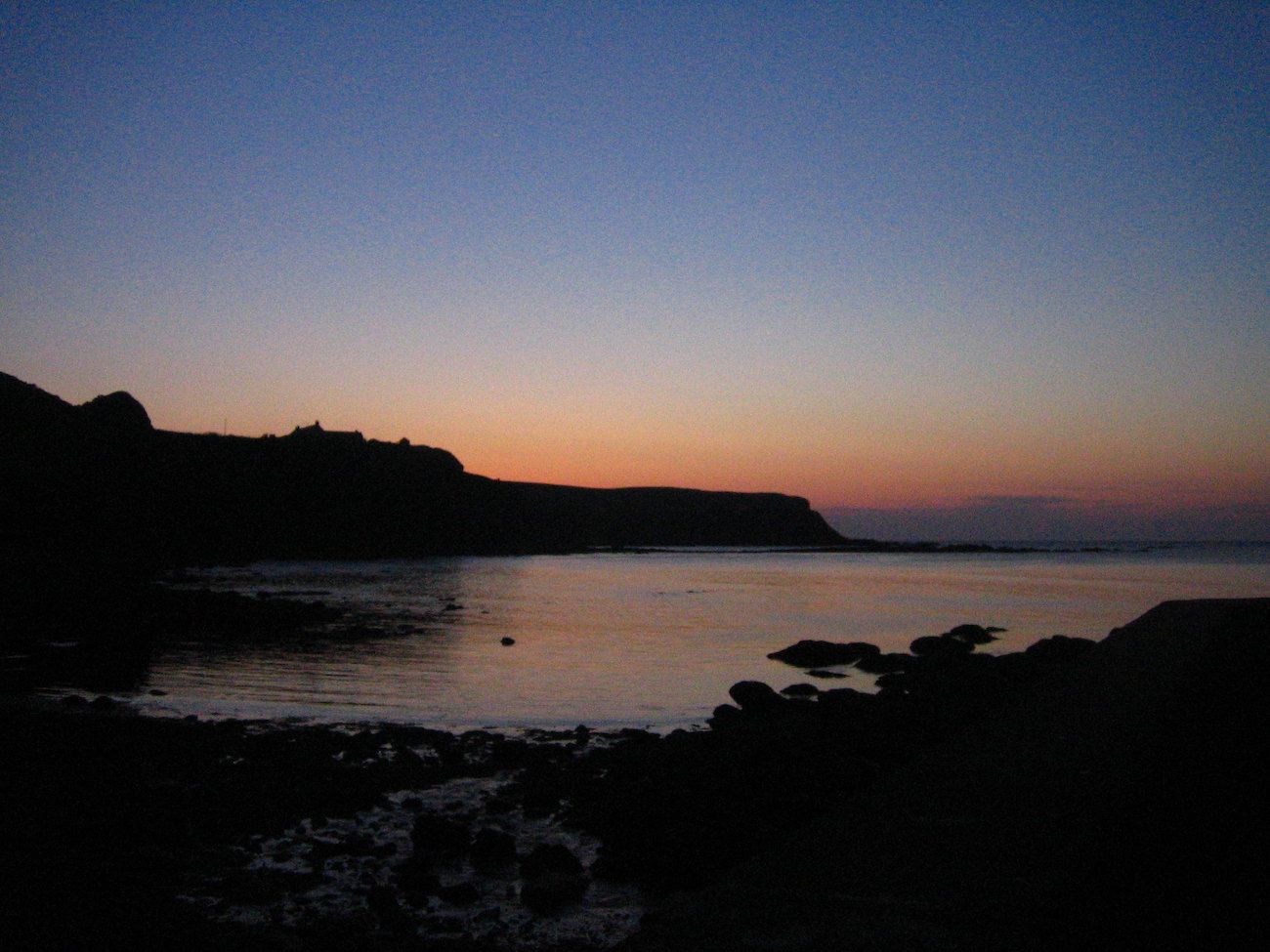 A narrow single-track lane leads down from the West Coastal Road to the seafront and the white-washed cottages that line its quayside. North-facing and below the cliffs, Pennan gets no direct sunlight for six months of the year.

It was easy enough to find the Pennan Inn that features prominently in the movie; it’s the only commercial establishment in the village. I checked in to one of its three bedrooms. The inn had stood vacant for several years before a young couple, Nikki and Peter Simpson, took it on some 18 months ago and determined to make a go of it. Peter does the cooking—and very well. That evening, I sampled his homemade cullen skink and it was brilliant. If that sounds off-putting, think smoked haddock chowder.

Across the street on the quay stands the red phone box made iconically famous in Local Hero. For some years, it was the most profitable phone box in Britain; Peter thinks it still must be. “In the summer, you sometimes can’t make calls from it, because the coin box is jammed full of coins. Everyone wants to make a call from that box.”

What I had anticipated, of course, was a couple of evenings sitting there in the snug, attractive pub and visiting with grizzled locals who would recall Local Hero’s filming and talk about life then and life today. But Pennan has changed. There are only 12 residents in the village today. In the harbor, there is now one small fishing boat dancing with the tides. It goes out in the summer months to fetch lobsters. The rest of the trim, well-kept cottages along Pennan’s street are now holiday homes, for weekenders escaping Aberdeen, or self-catering cottages let for a week at time. That’s something of a blessing for Nikki and Peter. “They come in here for meals, sometimes every day.” Peter has already earned a local reputation.

I walked the street several times, shooting pictures and pondering the story. At the far end of the street stands the village hall, empty, but apparently never locked. I went in to use the gents. There on the windowsill lay a saucer overflowing with coins to support the cleaning of the establishment. The quality of life in Pennan still must be pretty good.

Following the indescribably beautiful Coastal Trail west along what’s known as the Buchan Coast, to Banff and MacDuff, I passed imperceptibly at some point into Moray, then the road turned inland and back into Aberdeenshire. At Fochabers, I visited cute Baxter’s Village, a virtual industry built out of George Baxter’s Victorian grocery. Baxters foodstuffs still hold the Royal Warrant. In Keith, I visited the Strathisla Distillery and took a wee dram in the tasting room. The jovial taste-master has worked at the distillery for 40 years. On the outskirts of the town stand bonded warehouses aging their famous Chivas Regal. 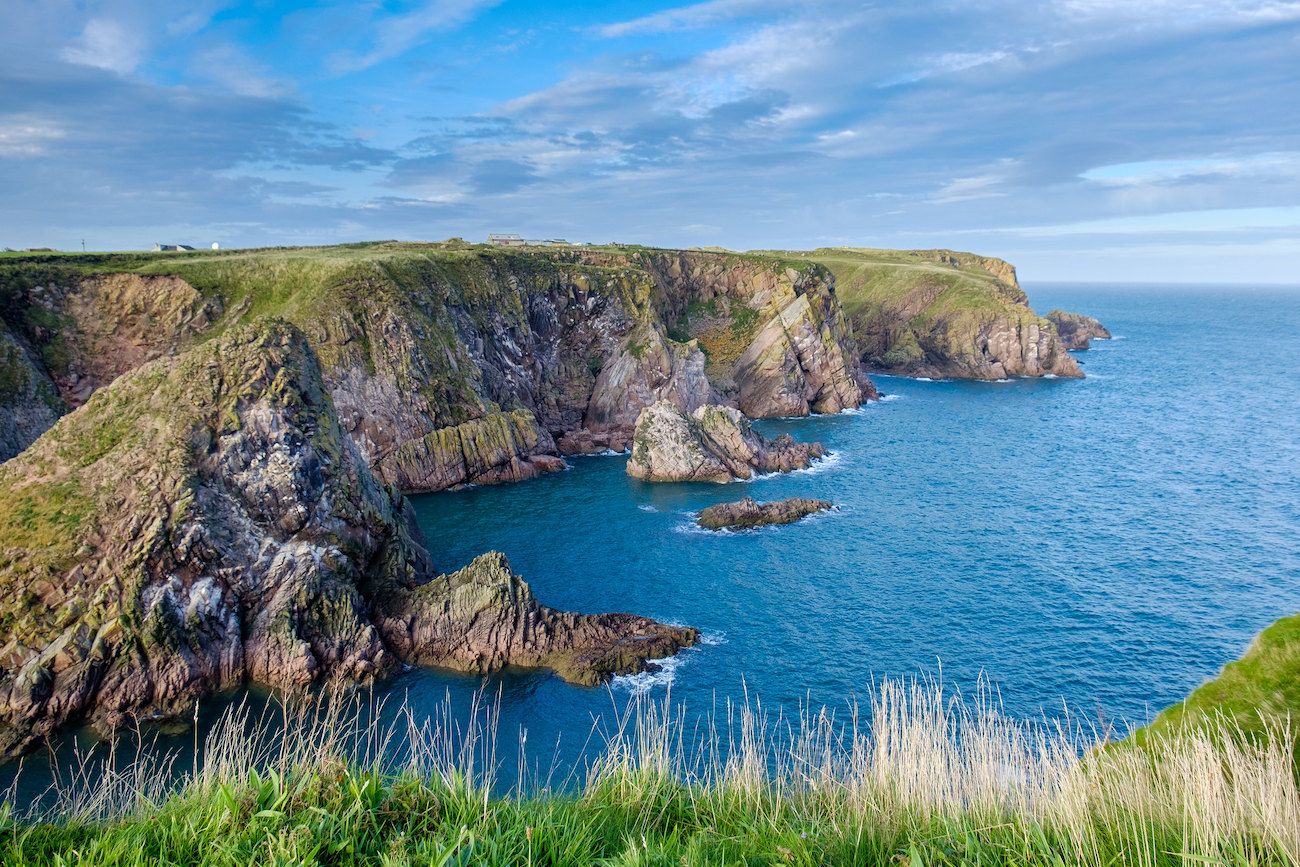 At Huntly, I climbed around the dramatic ruins of Huntly Castle, famed as the medieval seat of the Gordons, Marquesses of Huntly. Here for centuries, powerful Gordon noblemen known colloquially as “The Cock o’ the North” held court—and control of the region. It was a baronial residence for more than 500 years. There on the market square, I stopped in to the Gordon Arms, recalling my first visit to Huntly in 1980, when a mustachioed retired major from the Gordon Highlanders refused to believe that I wasn’t a “Huntly by name, come home,” and the local lads lined up tepid whisky-and-lemonades on the bar for me far faster than I could get them down.

Aberdeenshire, in fact, is awash with castles, with almost 300 of them scattered across the area. It’s known as “Scotland’s Castle Country.” It’s not the stunning castle ruins, gorgeous coastline or distilleries, however, that create the quality of life. Aberdeenshire is farming country.

This is not the empty, rugged Highlands, or even the woodlands of the Cairngorms at the county’s southwest corner. Mile after mile, from Aberdeen north and west, the rolling countryside is largely unbroken, open, fertile farmland. I saw long-haired Highland cows, herds of beef cattle and sheep, but principally this is Scotland’s bread basket. Here they grow the oats for Scottish porridge and the barley for Scottish beer and whisky. Market towns like Huntly, Turriff, Ellon and Invervarie support the dominant agrarian economy and the surrounding farming villages. And there, most probably, lies the real answer to the question.

City folk down in Edinburgh or Glasgow may not understand it, but the quality of life is good in farming communities, and people I talked to everywhere across Aberdeenshire agreed. They may not be wealthy, but they are healthy and wise, friendly and content—and wouldn’t have life any other way. And then there’s that saucer full of coins sitting undisturbed back on the windowsill in Pennan.

Getting to Aberdeenshire takes some planning. The most direct way is a flight to Aberdeen from one of the London airports. These are most easily and inexpensively made as connecting flights following on from North America, through British Airways. All the major car rental companies have outlets both at Aberdeen airport (ABZ) and in the city.

The train journey north to Aberdeen from Edinburgh takes several hours, but is a visually stunning route along Scotland’s east coast. If you wanted to complete the journey by train, the Grampian Line leads across Aberdeenshire’s rolling countryside to Inverness.
The official website of the Aberdeenshire Council is at www.aberdeenshire.gov.uk. There is much that would not be of interest to visitors, but their pages on leisure and travel are informative and helpful.

For more detailed visitor information on Aberdeenshire and the city, try www.aberdeencityandshire.com.