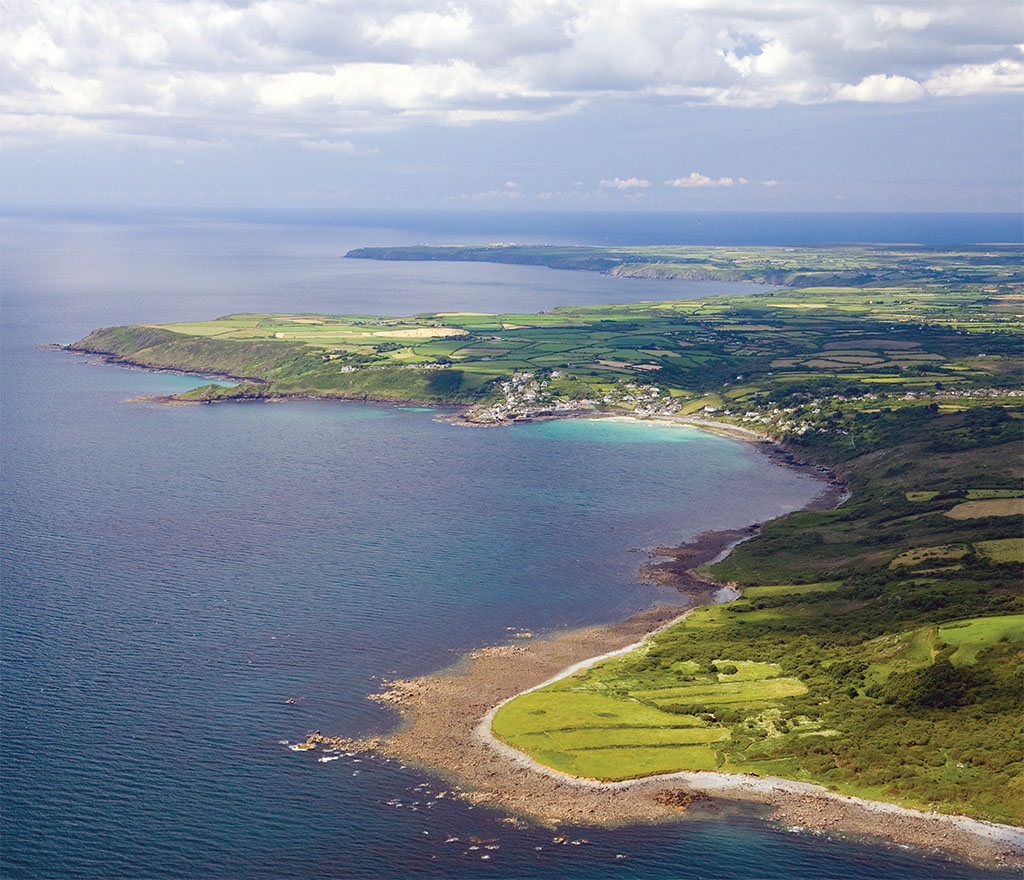 This aerial view of the Lizard looks south past Coverack toward Black Head and Lizard Point.[/caption]

England’s Southwest Coast Path is 630 miles long. Hikers may wish to walk the entire length, and certainly many have. My wife and I enjoy walking, but do not consider ourselves “hikers.” There are many places in Cornwall and Devon where walkers can enjoy the scenery and heritage of the Southwest Coast Path without expending the time and effort necessary to be considered a genuine “hiker.” The Lizard Peninsula is such an area.
“Lizard” has nothing to do with reptiles inhabiting the peninsula. The name comes from the old Cornish name “Lys Ardh,” or “high court.” In the past, the area was dotted, like much of Cornwall, with more than 100 tin and copper mines, which also produced some silver to enrich the king. Much of the Lizard is composed of serpentine, a beautiful greenish rock, which is fashioned into jewelry that can be found in many shops on the peninsula, especially at the southern tip—the most southerly point of the British Isles—at Lizard village.
There is rail and bus service to Cornwall, but the best way to see the Lizard is by car. A diligent search of car hire agencies and internet travel sites found a mini-van for £15 per day. We traveled with two grandsons, so needed space for boys and luggage, but on the narrow lanes of the Lizard, a smaller vehicle is preferable. And you will use less of the &dollar;8 per gallon petrol if you drive a sub-compact.
Most village shops in the Lizard have guidebooks for walkers, and there are many footpaths which cross the peninsula in addition to the Coast Path. Here are some of our favorite walks.


Drive to Mullion and follow the signs to Poldhu Cove. Park at Poldhu Cove in the pay-and-display lot. Set off to the Northwest on the Coast Path. One-half mile over a moderate headland is Church Cove. There are pleasant beaches at both coves, and a lovely medieval church gives Church Cove its name. There is a pay-and-display car park at Church Cove also. For a longer walk return to Poldhu Cove and take the Coast Path to the south side of the cove. At the top of the cliff is a senior care home that was once a hotel. Close to the home is the Marconi museum, which commemorates the first trans Atlantic wireless message, sent from here to Newfoundland on December 12, 1901. From the Marconi Monument take a path inland for about 300 yards to Angrous Farm and a stone memorial to John Wesley. This walk is also of moderate difficulty. 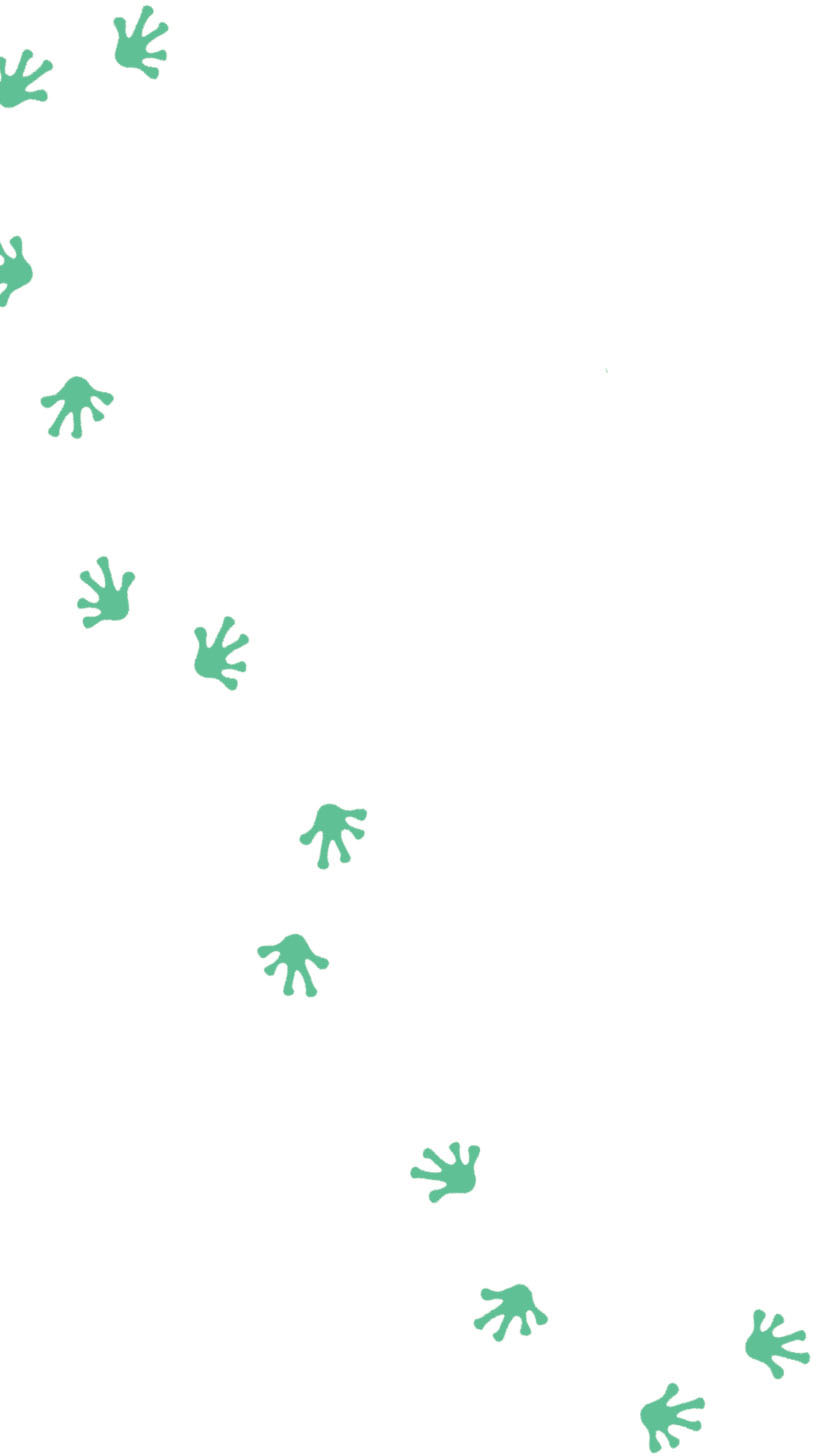 
From Mullion Cove car park, drive 100 yards toward the cove, then turn right up the hill to the Mullion Cove Hotel at the top of the cliff. There is a small, free car park across from the hotel. Walk northwest on an easy, well-groomed section of the coast path for half a mile. The walk then becomes moderately difficult as the path drops down to Polurran Cove and a wonderful sandy beach between rocky headlands. Total distance round trip from The Mullion Cove hotel to Polurran Cove is about two and one-half miles. 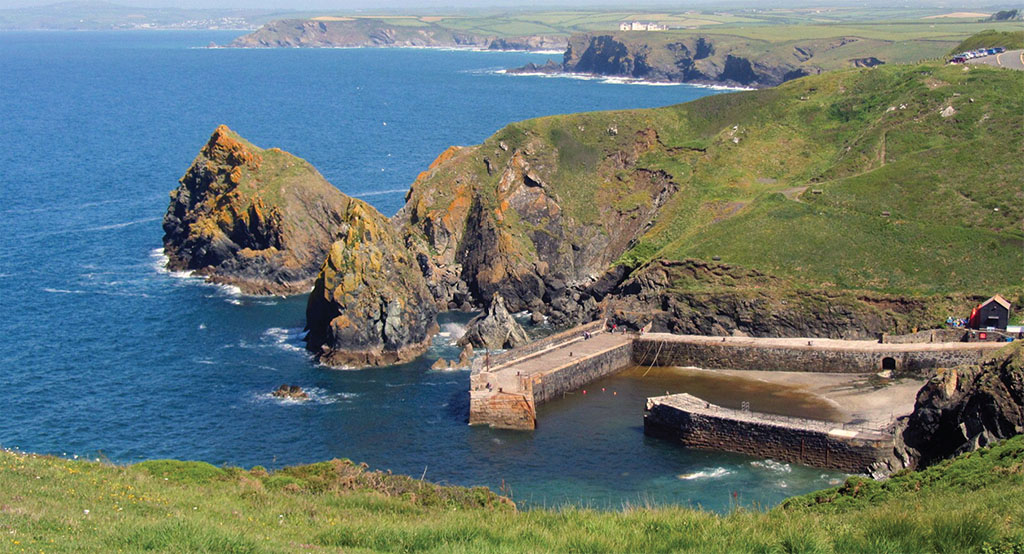 along Cornwall’s Lizard Peninsula. Their scenic rambles include the tiny harbor at Mullion Cove[/caption] 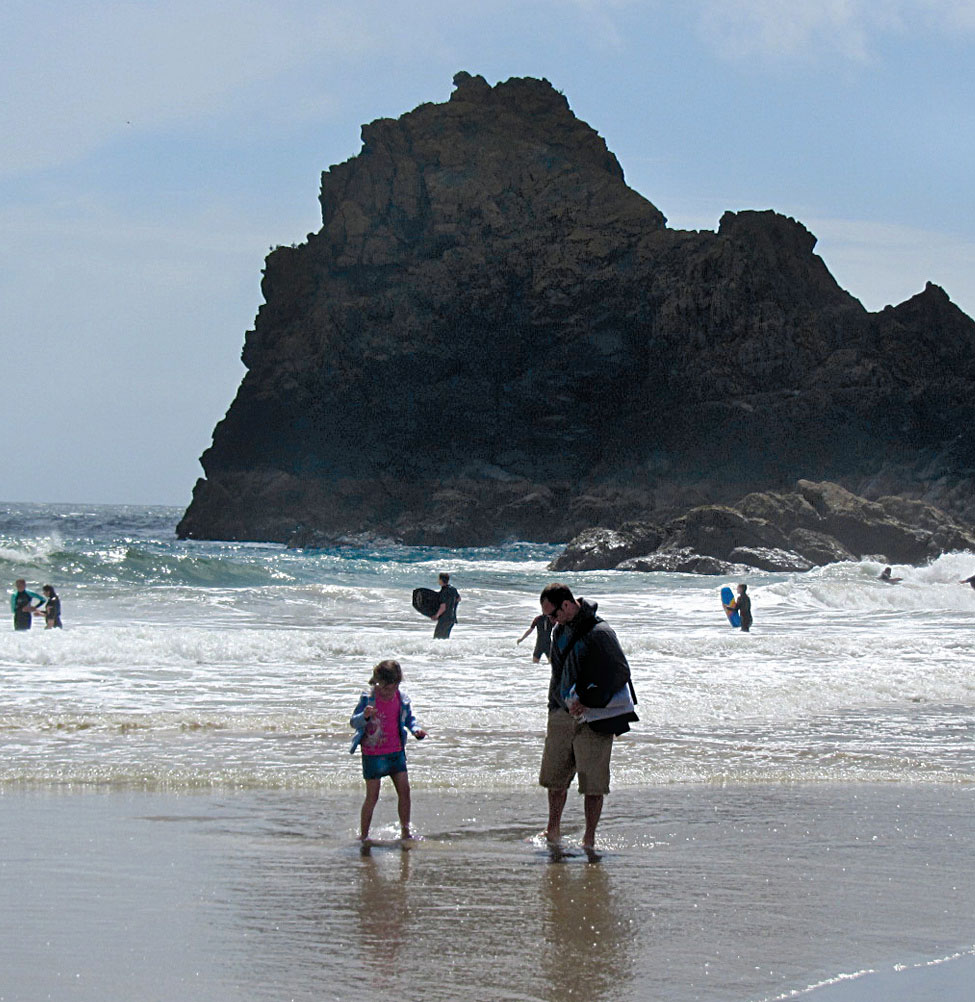 a climb to the top of Kynance Cliff (bottom) and splashing in the gentle waves of Kynance Cove.[/caption]


On the east side of Helston, the largest town on the Lizard Peninsula, on the A394, is the May Tree Restaurant. In Mullion, try The Old Inn for good pub grub. For a hearty sandwich at a reasonable price try the Mullion Cove Tea Room, or, in Coverack, visit The Wave for lunch.


The Kynance Cove car park is pricey, £3.50 for the day, but the cove has much to offer. The walk on a well-groomed path from the car park to the beach and return is moderately difficult. From the cove, the trail north first follows steps cut in the cliff. The climb to the top of Kynance Cliff is strenuous, but the views are spectacular. If you work up an appetite, return to Kynance Cove and enjoy a snack or sandwich at the café. Be advised—Kynance cove is popular, and will be crowded in June at the half-term school holiday and from late July through August.


There are two car parks in Coverack. The first is located where the B3294 arrives at the harbor. The second is through the village, where the road ends. From the second car park the Coast Path leads south to Black Head and Kennack Sands, a little more than two miles distant. But if Coverack’s shops call, turn around anywhere for a walk of from one to four miles of moderate difficulty. 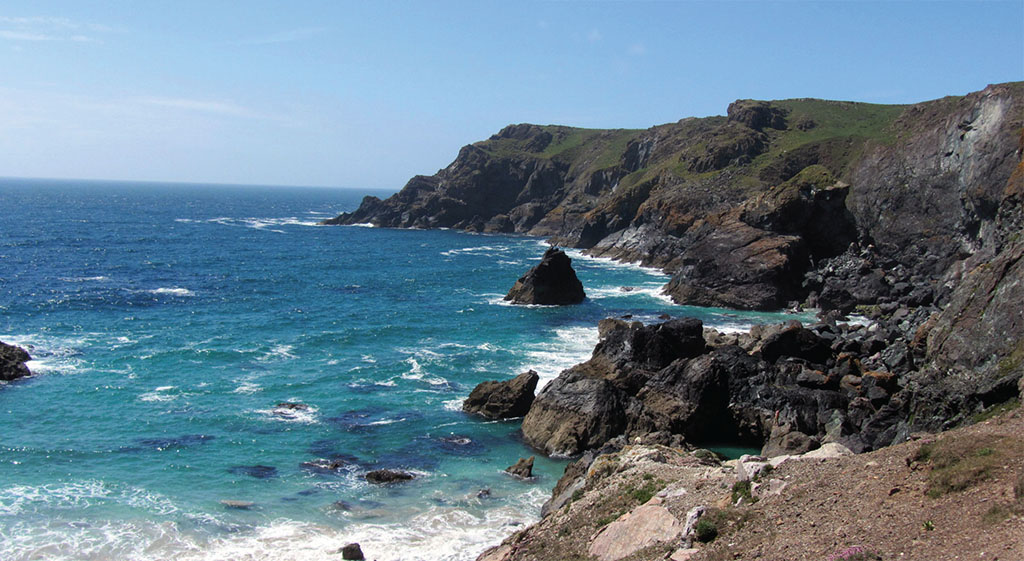 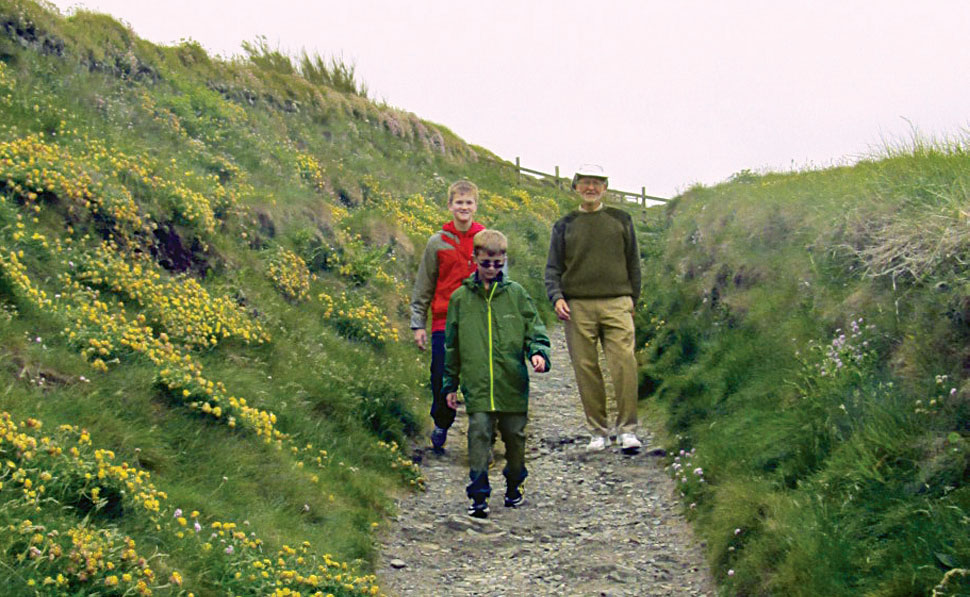 Walk &num;6 Cadgwith
A narrow, single-lane road leads to the village of Cadgwith. A large pay-and-display car park is located at the entrance to the town. Walk about 200 yards, behind flower-filled gardens, to the center of the village. The Coast Path leads either to the left—north, or to the right—south. Either way will lead to wonderful views from the tops of cliffs after a moderately strenuous climb from the cove. Both walks can be as long as you wish, depending upon when you decide to turn back to Cadgwith. If you go north, the path reaches Kennack Sands, another pleasant beach, in four and one-half miles for a nine-mile round trip. 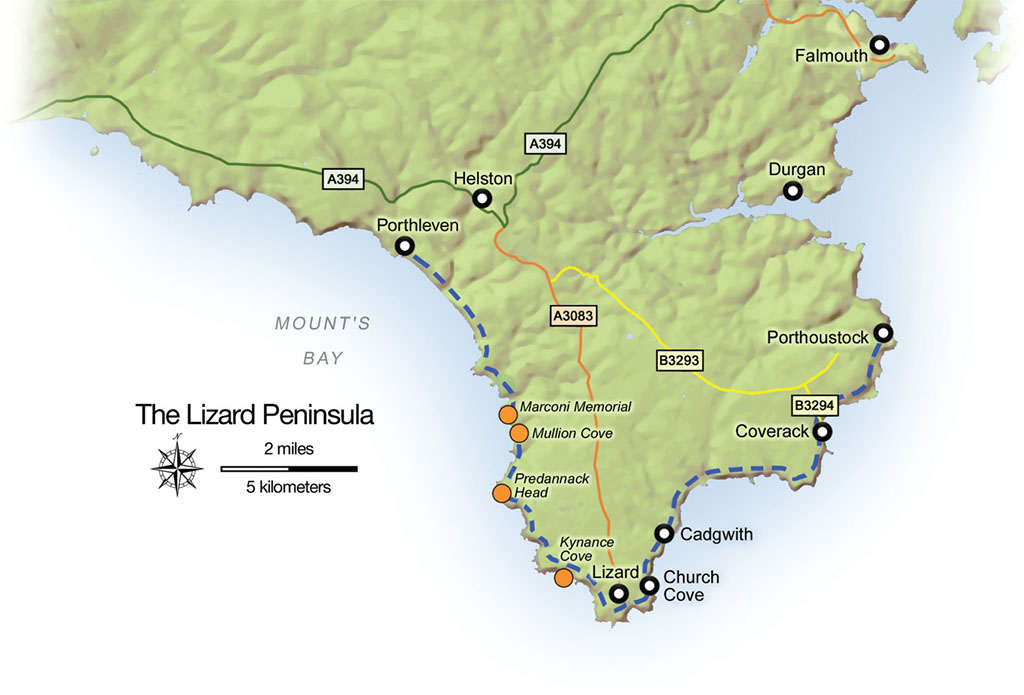 
From the car park in Porthleven go up the hill to the northwest on Harbourview Road. At the top of the hill, the Coast Path veers to the left. Abandoned mine buildings are visible in the distance along the cliffs that line Mounts Bay. The length of this moderately difficult walk can be variable, up to three or four miles depending upon how energetic one feels. When you return to Porthleven visit “Nauti but Ice” on the quay for a sandwich and Cornish ice cream.


From the Porthleven car park, walk the quay on the south side of the harbor, past shops and the Institute Building with its tower. Go left past the tower and follow the street until the Coast Path sign points to the right. The path follows cliff tops for half a mile, where the path will descend to Loe Bar, a sandbar that closed off Helston’s river access to the sea 800 years ago. The Anson Memorial along the path commemorates the wreck of HMS Anson on Loe Bar in 1807. The sinking gave Henry Trengrouse, who observed from the shore, the idea for the breeches buoy. Return to Porthleven for that sandwich or ice cream. The round trip is about three miles and is moderately difficult.

An internet search will lead to many hotels, B&Bs and self-catering accommodations on the Lizard. In Porthleven try “Suncliffe” B&B (telephone Barbara Hendy; 01326-562437), which has a wonderful location overlooking Porthleven Harbour. In Mullion, The Old Inn has five rooms. For an American-style motel with reasonable rates, try the Premier Inn, located across the car park from the May Tree Restaurant.