By Appointment: How to be Queen for a day 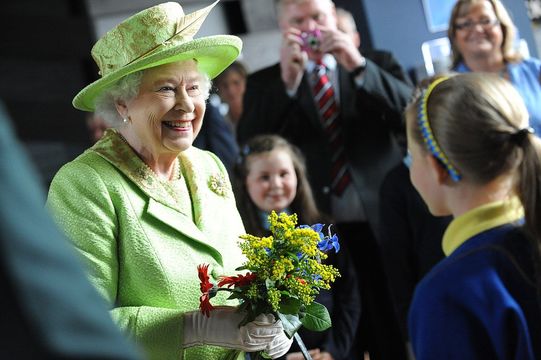 A Royal coat of arms and the statement “By Appointment” mark a product favored by the Royal Family and allow anyone to sample the material comforts of the Royals.

In the 1950s, American radio listeners and television viewers were treated to the idea of being “Queen for a Day.” This program, a forerunner to today’s reality shows, saw host Jack Bailey asking the audience: “How would you like to be Queen for a day?” Thanks to a certain revolutionary period in the 18th century, this was always a rhetorical question for Americans.

A visit to Britain, however, does create the opportunity to enjoy, albeit indirectly, some of the pleasures of being Queen for a day—without the cost of buying a castle or joining the nobility.
The British Royal Family has always favored certain suppliers by the granting of a royal warrant. The warrant is then often displayed on packaging, advertisements, store fascias, and websites. They are restricted to the households and persons of the Queen, the Duke of Edinburgh, and the Prince of Wales. No other living member of the Royal family grants them.

Older and historic packaging can often display the warrants of long-dead Monarchs. Only tradesmen can be awarded warrants; professional services, government departments, the media, and entertainment or refreshment places cannot be granted such an honor.
Royal warrants are now held for five years—they used to be held for 10—and can be renewed. There is a single meeting of the royal household tradesmen’s warrants committee every year in November at which warrants are reviewed and decided upon. The Lord Chamberlain, along with other members of the royal household and representatives of each of the households of the three warrant-granting members of the Royal family, make up the committee, and they have established some minimal criteria whereby it is decided whether someone can hold a royal warrant.

This reward comes for supplying goods of the highest quality for a minimum of five years to these three members of the family and the royal household. The granting of a warrant allows the merchant or manufacturer to display the appropriate royal coat of arms on products, which helps make these goods stand out on the shelves, however discreetly.

Queen for the day

WHILE SOME WARRANT HOLDERS are nationwide companies, there is a predominance of retail warrant holders gathered around three key royal residences. Many of these companies are mom-and-pop operations, including rural artisan and small-scale firms providing a surprising range of products for the comfort and operation of the Royal family.

You are most likely to visit retailers with the royal blessing near Windsor, Sandringham and Balmoral as well as in London. Products with the royal warrant are easily available in stores across the country, though, leading to the question: How possible is it to spend a day enjoying the same comforts as the Queen, her husband and eldest son?

The day could start with a royal breakfast choice: tea from Twinings or Taylor’s of Harrogate with milk from Dairy Crest. The quintessential British breakfast delight of a kipper can be enjoyed from James Knight of Mayfair. Toast with bread from high-end retailer Waitrose can be spread liberally with Wilkin &Sons’ Tiptree marmalade to follow. Freshen up after breakfast with Bronnley & Co soaps.

While the Queen may follow breakfast with tiresome and dull official duties, visitors have a much more pleasant set of duties to follow: shopping and sightseeing. Not surprisingly, some of the most famous and exclusive retailers in Britain have been granted a royal warrant. Fortnum & Mason and Selfridges in London and Jenners in Edinburgh are perfect destinations. The Royal family themselves rarely shop, but if they did, these are the stores they would frequent.

Away from the capital, however, small independent operations are just as likely to carry the royal mark of approval and can prove delightful to visit. An example is Paxton & Whitfield, the cheese-monger, with branches in Jermyn Street as well as Stratford upon Avon and Bath. In Scotland, visit the Deeside Deli and Garden Center for a taste of more rural delights, or George Strachan Ltd, established in 1926, with premises in Aboyne, Ballater and Braemar on Royal Deeside.

LIKE MANY OF HER SUBJECTS, the Queen might find herself in need of refreshment around 11 o’clock in the morning. A visit to Smiths the Bakers, a family-run bakery supplying the family while in residence at Sandringham, will yield a cake to enjoy with the cup of tea. However, most Britons would rather enjoy McVitie & Price’s biscuits with their tea (leading to that perennial English debate—to dunk or not to dunk your biscuit).

Suitably refreshed, you now face a conundrum for lunch: while the Queen famously favors certain high-end and stylish London hotels and restaurants for public and family events, warrants are not given to such establishments. Brown’s Hotel and the Savoy may be patronized by royalty, but cannot display such a link.

Instead, visit grocery store Waitrose or the food hall at Selfridges, and gather up the ingredients for a royal picnic in the park from Prince Charles’ Duchy Originals range. They may not have the warrant, but it might be safe to assume they are served in the royal households. After all, what son doesn’t want to impress his mother, however regal?

IN 2000, A 62-YEAR TRADITION was summarily ended when Harrods removed its Royal warrants, as its then-owner decided to sever Harrods’ commercial links to the monarchy by taking down all its royal warrants. Mohamed al-Fayed instructed workmen to take down royal warrants from the world-famous storefront after spectacularly falling out with the Royal family following the deaths of Lady Diana and his son, Dodi. The warrants were still valid, but al-Fayed had indicated that he did not wish to renew them. All Harrods’ packaging and stationery were redesigned, and all vehicles that displayed the warrants were repainted. This is the only occasion when such a prestigious link has been ended by a retailer.

Sometimes, however, warrants are dropped from packaging for more base commercial reasons. Two favorite British brands, After Eight chocolates and Britain’s favorite cracker, Jacob’s Cream Crackers, have discreetly dropped their warrants from the packaging. Nestlé’s After Eight is now a global brand sold in more than 70 countries. In December 2009, Nestlé standardized its packaging to ensure consistency in all countries, resulting in the royal warrant being removed, said the company. United Biscuits, which makes Jacob’s, says it has dropped the warrant on the crackers but has retained it on other packaging.

Tobacco giant Benson & Hedges had its royal warrant revoked in 1999 with the party line being a drop in demand from the royal households; in truth, the tide had turned against tobacco advertising and the family could no longer be seen to promote such a product.

The Patents, Designs and Trade Marks Act 1883 and the Merchandise Marks Act 1887 both stipulate that it is illegal for someone to pretend that they have a royal warrant when they do not. The fine remains at £20, which seems rather paltry considering the significant value that a royal warrant provides to anyone who holds it.

AFTER A DAY SPENT SHOPPING and experiencing a little of the lives of the Royals, what better way to relax than sample some of the drinks that boast a royal warrant. Given the need for the family to entertain, as well as to enjoy the finer things in life, there can be no surprise that many of the world’s most famous drinks get the Royal approval.

At least eight Champagne houses, including some of the most famous champers in the world, have been granted warrants. One house is Mumm, which has worn a royal warrant since 1964. So popular is Mumm’s with Royal families throughout Europe, including Britain, the company once branded a label: “GH Mumm and Co. Champagne of Sovereigns.” If the Queen had visitors drop by unexpectedly and had to go out and make a last-minute purchase, she could quickly visit a Waitrose where a bottle of Mumm can be bought from around £36.00.

During your shopping, make sure that you pick up some H.&L. Russel padded garment hangers. You may not have the maidservants on hand that their Majesties enjoy to hang your clothes, but at least your garments can be treated royally. Then pour yourself into a hot bath, pampering yourself with Bronnley soaps and fragrances. Finish the day cosseted by Dorma bed linen. As you drift off to sleep, spare a thought for the 85-year old great-grandmother who occupies the British throne. You might have lived like a Queen for a day, but she has lived like that for almost 60 years.