The shock of the familiar at St. Martin-in-the-Fields 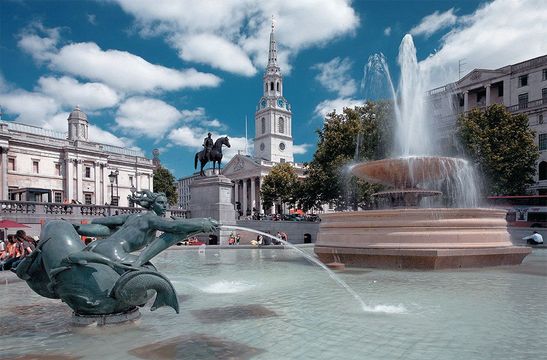 Have you ever had a shock seeing someone on your travels that looks strikingly like a close friend from home? You might if you see St.-Martin-in-the-Fields’ façade.

Many Americans visiting London will pass through Trafalgar Square and there experience the shock of the familiar. Standing on the North East corner, east of the ponderous National Gallery and where St. Martin’s Place cascades traffic from the West End and Soho into the square, 18th-century St.-Martin-in-the-Fields church may look comfortingly like a church you know at home.

This is no accident. The James Gibbs-designed Anglican Church building had an immediate and profound effect on church design throughout the English-speaking world, including colonial North America. St. Martin’s became a blueprint for religious buildings of all denominations across the United States.

British Heritage was given an exclusive tour of the church and its surrounds by New Orleans—born Julie Emig, head of marketing at the church, who is as fascinated by its trans-Atlantic links and history as she is keen to improve the visit for current visitors to London.
“As there were very few trained architects in the colonies, the new American churches were based on fashionable churches built in England,” Emig says. “In his 1728 Book of Architecture, which became an essential part of the colonial gentleman’s library, Gibbs provided illustrations of the recently completed St.-Martin-in-the-Fields, complete with several preliminary versions of his design.”

Emig is quick to reassure that the building, which is now Grade 1 listed (the highest level of official heritage protection), is a working church, not a mausoleum. It boasts 20 services a week, the award-winning Café in the Crypt, brass rubbing, shop and new space for events. The building has recently undergone a £36-million refurbishment, which has restored old places and created new ones, including light wells that now flood natural light into the church and crypt, and both are now fully wheelchair accessible for the first time.
American interest in the church has never abated, but Emig provides evidence of the scale of that interest. “We get around 750,000 visitors annually, of which around a third are from the United States,” she said. “Many come to enjoy the Café, but others come to celebrate the church’s historic link with the U.S.”

While there are many churches in the United States that can trace their design to St.-Martin-in-the-Fields, says Emig, none are considered a better adaptation of the design than St. Paul’s Chapel in present-day Manhattan.

“St. Paul’s is considered the closest replica,” Emig said. “Designed in 1764 by Thomas McBean, a student of Gibbs, it has the combination that is the signature feature—a monumental portico and an elegant steeple. Unlike St.-Martin-in-the-Fields, however, McBean positioned St. Paul’s portico and tower at opposite ends, giving his church ‘balance’ but losing the genius of Gibbs’ combination of classical portico and traditional steeple. It was a much-debated innovation at the time!” 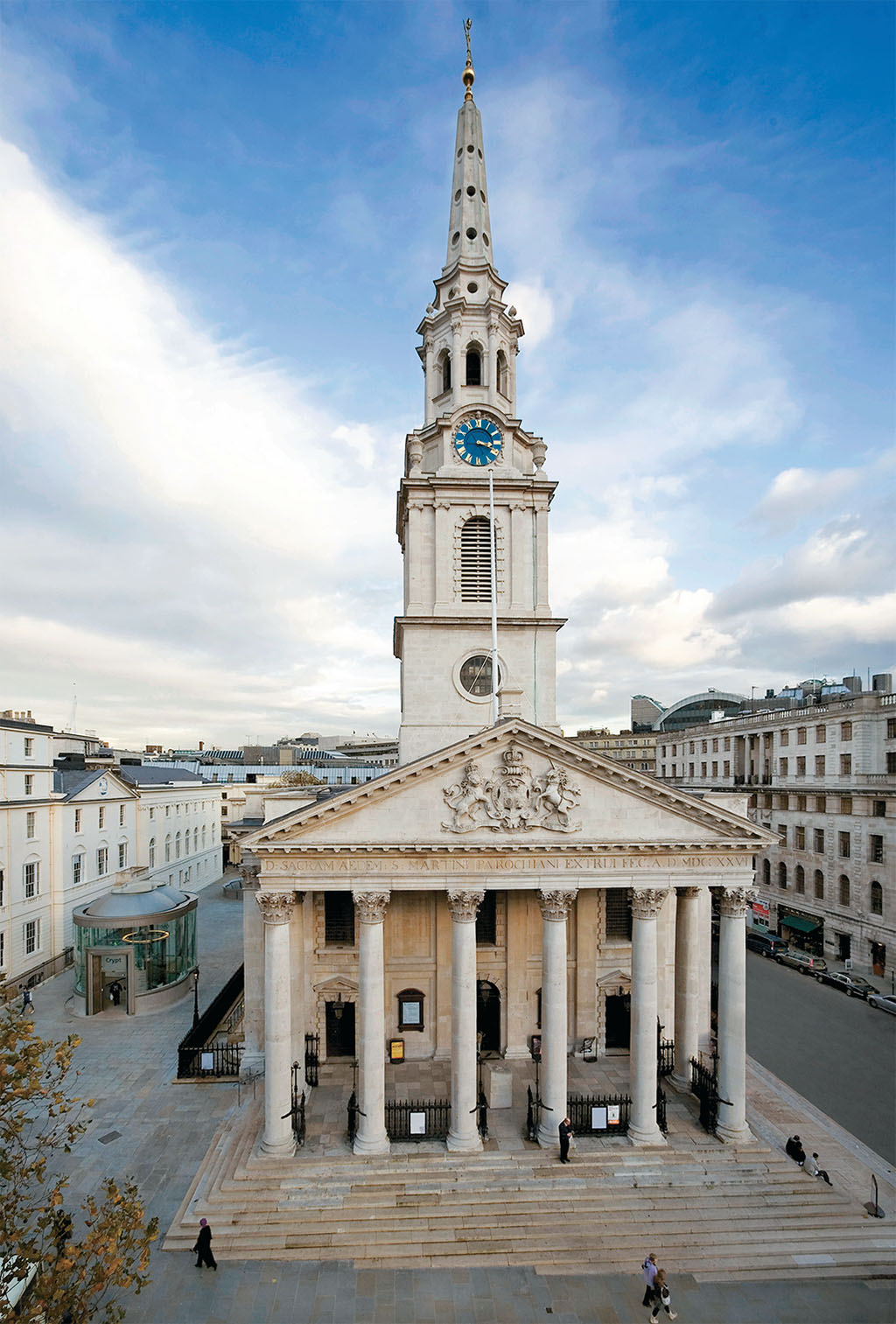 The chapel is Manhattan’s oldest public building still in use and was designated a New York City Landmark in 1960. A survivor of New York City’s Colonial era, this structure served as place of worship for both American and British military officers during the American Revolution. Washington visited for a special service after his inauguration in 1789.

In Providence, R.I., another church can be found with a direct influence from St.-Martin-in-the-Fields. The First Baptist Church, constructed in 1775, was designed by merchant and self-taught architect Joseph Brown. Standing across the Providence River just northeast of downtown, it was the largest building project in New England at the time of its construction. The church’s tower and steeple are an exact copy of plate 30 in the book, included as an alternative design for St.-Martin-in-the-Fields.

Its construction was greatly aided by the fact that the British had closed the port of Boston as punishment for the Boston Tea Party. Many shipwrights and carpenters, being thrown out of work, moved to Providence to build the meetinghouse.

Who was St. Martin?

The church takes its name from the 4th-century Saint Martin of Tours who, on a cold winter’s day, cut his soldier’s cloak in two to share it with a beggar. That night, the beggar returned to him in a dream as Christ: “For as much as you did it to one of the least of these, you did it to me” (Matthew 25:40). 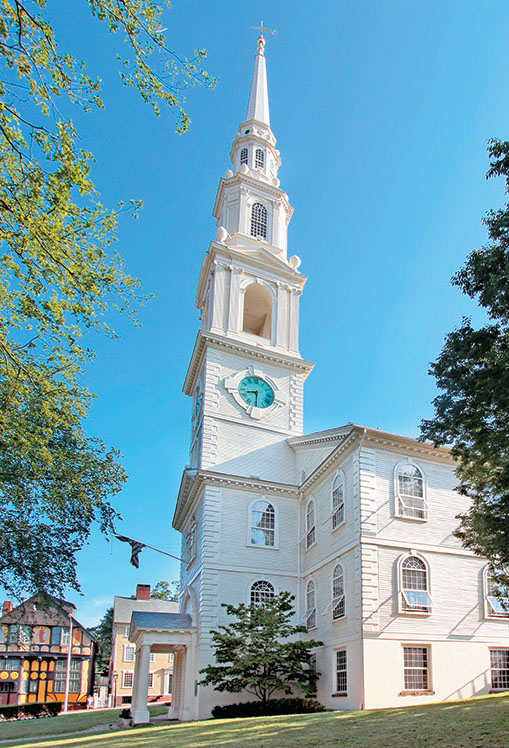 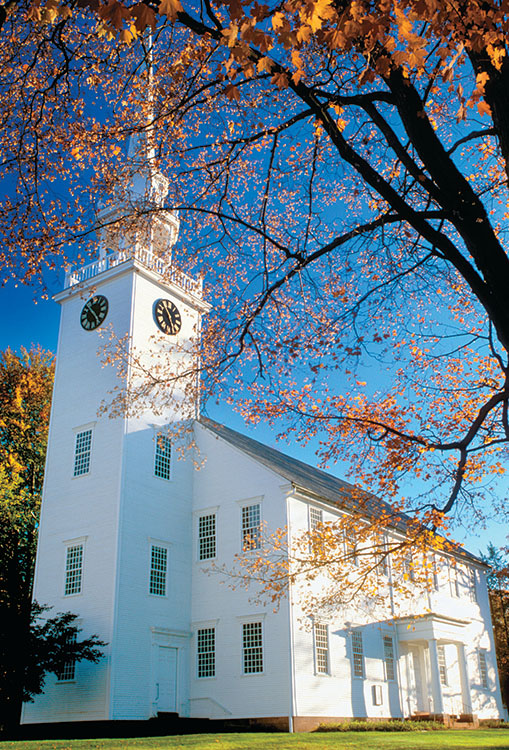 In the appeal document to raise funds for the renewal, HRH Prince Charles wrote: “For the first hundred years of the life of the present church building, it was hemmed in and hidden and it was not until Trafalgar Square was laid out in 1829 that its full grace and beauty was revealed.

In the end it became the model church throughout New England and much of North America. Those who built the church in the 1720s were criticised for its great expense; 280 years later, few capital investments have been so worthwhile. The church’s openness to the world, its constant creativity and care of those in need, its international outlook and commitment to people of other faiths are of striking significance in our time.”

A perennial question, as shown by a selection of those churches above, is the matter of the possessive apostrophe: the church’s full name is St.-Martin-in-the-Fields, though when abbreviated to St. Martin’s claims the punctuation mark.

Highlighting the recent work and explaining what it meant for the fabric of the church, Emig pointed out the clear vista around the property, the refurbished buildings immediately adjacent to the church along St. Martin’s place that serve as parish offices (“the vicar’s flat is on the top floors overlooking the church”), as well as the entrance to the underground facilities.
Emig pointed to the cleared and paved parish yard at the rear of the church, the former site of market stalls that used to grace the site, and outlined the church’s plans. “We are planning a pop-up café in this area, which we consider will be very popular in the summer months,” she said.

The result of spending £36 million on the church’s fabric is clear: the stonework glitters, the interior has been spruced up and the whole atmosphere is of a religious campus of properties. Emig commented with some pride, “We have had churches and designers from around the world to study what we have done and how this work can be taken home by them for their church developments.”

Music is another strong element of the church’s program, Emig noted. The world-renowned Academy of St.-Martin-in-the-Fields was founded at the church in 1958. The orchestra is now a separate entity from the church, but its historic links remain.

Emig is passionate that visitors appreciate that St.-Martin-in-the-Fields is a working church, with the Anglican liturgy at its heart. The present vicar, the Rev. Dr. Samuel Wells, has served as a parish priest for 15 years—10 of those in urban priority areas.

He also spent seven years in North Carolina, where he was Dean of Duke University Chapel. “St. Martin’s is at the crossroads of London and the world,” Wells said, “of faith and action, of social justice and the arts, of tradition and innovation, of commerce and charity, of political and personal struggle.”
Emig revealed that he brought an unusual souvenir of his time in North Carolina, “Sam is a true Brit and has a great English accent, but he developed a habit of saying ‘y’all’ that he has brought back with him.”

Today, the tradition of Gibbs-inspired churches is thoroughly en-grained in the collective American consciousness. St. Martin’s has been the template for many denominations, a popularity that is undoubtedly a testament to the inherent value of Gibbs’ original design that is visible for all today.