Tracing Britain's coastline - from London to the Vale of Berkeley 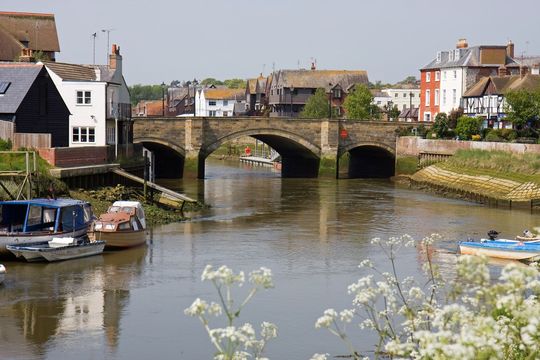 A six-day route examining Britain's coastal habits, from London to the Vale of Berkley at Slimbridge, a celebration of its wildlife and conservationism.

The rich ecosystems of England’s landscape are varied and beautiful. In the lush estuaries along the British coast, the marshes, river banks and reed beds provide fertile haven for an astonishing range of wildlife. Conservationists have created an environment that both encourages visitors and preserves the habitat of more than 200 varieties of wetland birds: Reed Buntings, Barnacle Geese, Redshanks and Water Rails.

Day 1: To the West Sussex Coast

Turn south from London or the airports. South of Dorking, pick up the A29 across the rolling downs of Sussex to Arundel. Spreading out in the shadows of Arundel Castle, there is much to delight in this attractive town. The Wildfowl and Wetlands Trust on the marshes of the River Arun is a peaceful highlight. Its reed beds and woody banks are home to Sedge Warblers, New Zealand Blue Ducks, Bewick’s Swans, Sandpipers and dozens of other species. But take the time as well to visit historic Arundel Castle, the ancestral home of the Duke of Norfolk, hereditary Lord Marshall of England and the nation’s senior Roman Catholic peer. The small Catholic cathedral nearby was understandably built with Norfolk wealth and is a memorable visit also. 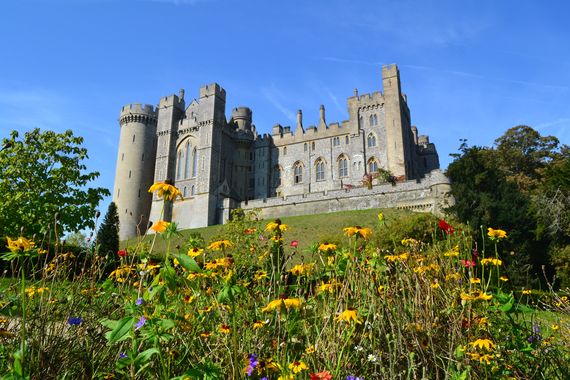 Today, turn west along the south coast. The M27 is unattractive but quick. You might pause to visit the pretty Chichester Cathedral or the acclaimed ruins of Fishbourne Roman Villa. Or perhaps take a slight detour to Winchester, the ancient capital of Saxon England, and Winchester Cathedral.

Our destination, though, is southwestern Hampshire, and The New Forest. The New Forest Visitors Centre in Lyndhurst, “Capital of The New Forest,” tells the story of this ancient hunting preserve of William the Conqueror. Virgin hardwood groves of oak and beech cluster among giant evergreens. Through the woodlands and rolling moors, herds of wild ponies and deer roam uninhibited by human life.

The visitors’ center can help as well with accommodation, though there are many options in Lyndhurst and the small town of Brockenhurst just down the road. If your timetable allows, it is certainly worthwhile to spend an extra day exploring the 90,000-acre New Forest, the shipbuilding village of Buckler’s Hard and Beaulieu. In spring, especially, don’t miss Exbury Gardens with their famous display of rhododendron and azaleas.

Day 3: An Excursion to Poole

This morning you might take an excursion southwest into Dorset and follow the coast through Christchurch and Bournemouth. It’s a short drive. From quayside in Poole, you can catch a passenger ferry (not much more than a fishing boat) across Poole Harbor to Brownsea Island, a wildlife mecca and nature reserve owned by the National Trust, featuring one of the largest heronries in Europe. It was here on Brownsea Island that Lord Baden-Powell set up the first Boy Scout camp.

You might visit the unusual themed gardens of Compton Acres on Canford Cliff, from heather dell to Japanese garden, before routing back toward your lodgings in the New Forest. Perhaps take one of the Ornamental Drives through the hardwood groves and over the heath. Drive slowly; those ponies can be anywhere.

Day 4: North to The Cotswolds

Turn north this morning toward the classic medieval city of Salisbury. The A36 will have you there in half an hour. Do take the time to visit the magnificent Salisbury Cathedral, with the tallest spire (404 feet) in Britain and the largest cathedral Close. Salisbury’s is also a fun, small city to explore and shop in as well.

Then, continue north on the A36 before turning west on the A303 toward the village of Mere and the house and gardens of Stourhead. Stourhead may not be an exactly natural habitat, but it is the quintessential 18th-century interpretation of such. It was the intention of the 18th-century landscape gardeners not to destroy nature, but to “improve” it.

Taking the gentle stroll around the lake at Stourhead, in any season of the year, it’s hard to imagine that it could be improved anymore. There is little wonder that Stourhead has long been known as “The Flagship of the National Trust.”

You can recapture the A36 heading across green and pleasant Wiltshire toward Bath. Again, if time permits, it’s hardly necessary to tout the charms of this small Georgian city. Bath is always crowded, however, so if you are so inclined, do have reservations for accommodation before landing in town. Otherwise, catch the A46 north into the escarpment of the Cotswold Hills. The market towns of Stroud, Tetbury and Cirencester have plenteous accommodation, and Tourist Information Centres to help you locate lodging—from country house hotels to B&Bs. 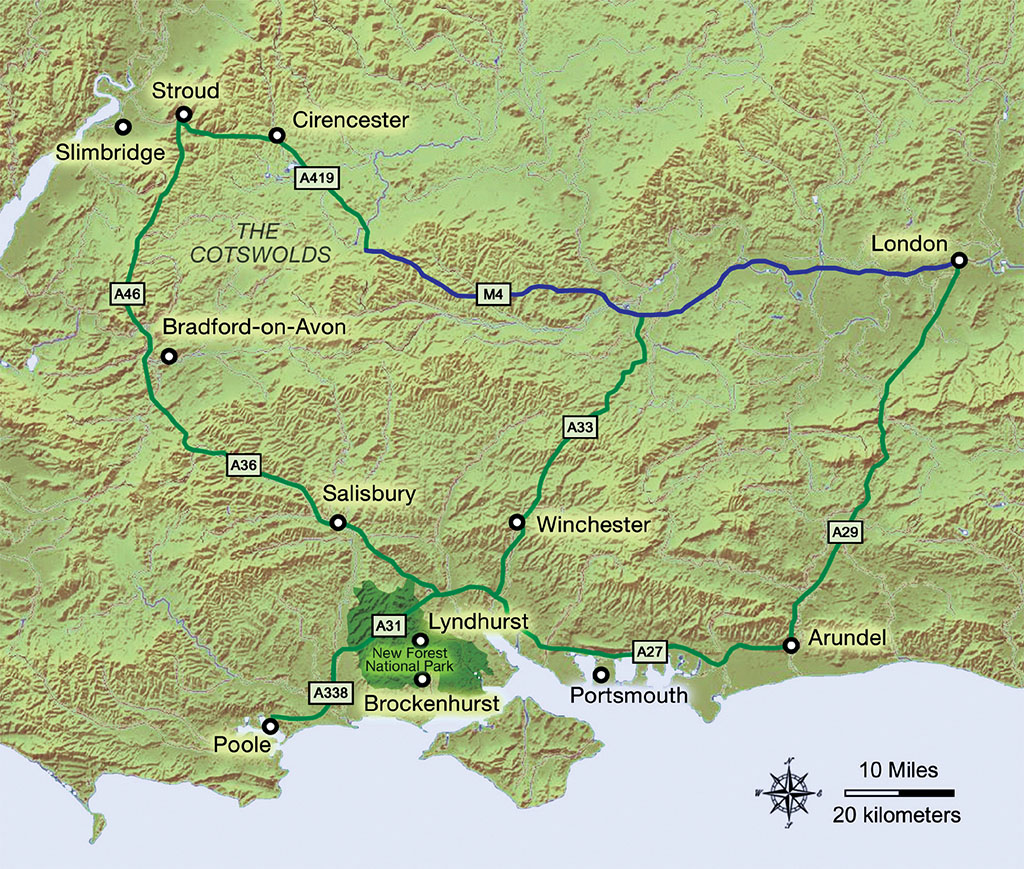 Day 5: The Wildfowl at Slimbridge

Today’s excursion is the easily accessible Vale of Berkeley on the Severn Estuary. A highlight visit of this itinerary is the Wildfowl & Wetlands Trust at Slimbridge, the world’s largest and most varied collection of wildfowl. More than 180 species of geese, swans, ducks and even flamingos fill the estuary wetlands. In addition to the protected collections, paths and blinds across the marshes sometimes reveal unusual varieties of birds, drifting on one of the world’s major migratory flyways. Nearby, you might visit historic Berkeley Castle (where the unfortunate King Edward II met his end) or the Edward Jenner Museum next door.

Of course, there is no lack of scenic beauty or interesting exploration in The Cotswolds. Among the most picturesque and “typical” English countryside, the Gloucestershire landscape showcases tidy villages cradled in gentle dales, thatched cottages of honey-colored stone, gabled shops and grand churches. If time permits, this is a place to linger and explore.

Day 6: Into the Thames Valley

If the time has come, you can most easily return to London and its environs by dropping down onto the M4 and heading back to town. It’s a few hours at most. If you are heading for town, perhaps your adventure will inspire a visit to the world-class Natural History Museum on Brompton Road. Of course, the exciting city of Oxford is near at hand, and the Thames Valley itself and Royal Windsor has much to delight...