Exploring the rare elements of Elizabethan London that remain 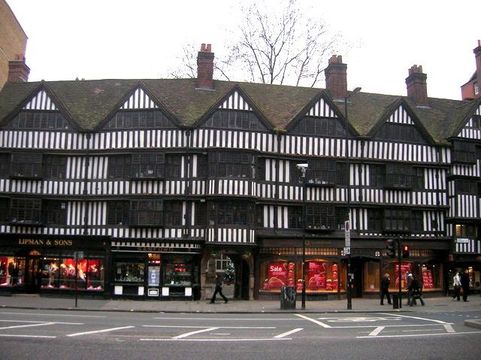 A couple of months ago we explored Roman London. There’s a surprising amount of it, not least because the Romans constructed their important buildings from stone. The Tudors, a thousand years later, often chose brick, which has also sometimes survived, but their other famous building material, timber, has not always enjoyed such longevity.

The original Globe Theatre burned down in 1613 and the Great Fire of 1666 destroyed much of ‘wooden London’–indeed, it was the buildings’ sheer flammability that saw the fire rage for nearly five days. But there are survivors of Tudor London, all the more precious for their rarity so, today, let’s celebrate treasures of Elizabethan London.

After many years of ‘exile’ outside the capital during her sister Mary’s reign, Elizabeth returned as queen in 1558. The City that welcomed the youthful, uncrowned monarch was fully-walled and covered more or less the same footprint the Romans had occupied but was already unrecognisable.

Charterhouse suffered the same fate as most religious institutions during Henry VIII’s Reformation. The former Carthusian monastery had been seized and was now a mansion for wealthy noblemen. Elizabeth consulted her Privy Council there in the days before her coronation. In 1611, it was bought by Thomas Sutton, who turned it into a school and alms-house, which it remains to this day. The school has moved to Godalming but more than 40 ‘Brothers’–“decrepit or old captaynes, either at sea or land, maimed or disabled soldiers, merchants fallen on hard times, those ruined by shipwreck or other calamity” remain resident.

Last year, the building was opened to the public. The museum is free of charge but, for the full experience, join a tour led by one of the residents, taking in the Great Hall, where the Brothers still gather each day to eat, the Great Chamber, Wash-House Court, Master’s Court, and the glorious gardens. Each Brother has a different and very personal perspective, so it’s worth going more than once.

A few streets from Charterhouse, St Bartholomew’s Gatehouse is one of Tudor London’s most fortunate survivors.  Its first lucky escape was during Henry VIII’s dissolution when the Augustinian Priory it guarded was demolished. The gatehouse escaped notice and, in 1595 was even given a fancy new timber-framed frontage. Its second close-shave saw the Great Fire of 1666 burn itself out a hundred yards or so away at Pye Corner in Giltspur Street.

We have a Georgian moderniser to thank for the gatehouse’s third survival, when the arch’s unknown owner, instead of demolishing it, added a classical facade over the Tudor beams. In 1916 a German Zeppelin bomb missed the arch by yards, but blasted away the front, revealing its Elizabethan timbers in all their glory. It’s not open to the public, but glorious to see–don’t miss the small figure of St Bartholomew in an alcove between the windows. Do walk through the arch to enjoy the building from behind, and while you’re there, pop into the ancient church of St Bartholomew the Great, one of the loveliest places of worship in the City.

The legal profession came into maturity during the Tudor period and the area around Holborn is still home to the various Inns of Court, the professional associations of London’s barristers.

Staple Inn, originally part of Grey’s Inn, was built in 1585. If you go to Chancery Lane you can’t miss it; it’s the largest timber-framed building in the capital. In Elizabethan times it was the Wool Staple, where wool was weighed and taxed. Like many Tudor buildings, it was given its famous black and white appearance in Victorian times; originally the wood would have been plain.

Glimpsed through quiet archways, the areas around the Inns of Court feel as though you shouldn’t be there–their cobbles and gas streetlamps give a real flavour of how it would have been and it has a ‘closed’ feeling to it. Although it is still a working area, there are ways to get into some of the most magnificent buildings.

The curious Temple Church, for example, dating back to 1185, remains home to effigies of Knights Templars, while the gardens are some of the most beautiful in London. Tours of Middle Temple Hall need to be booked in advance but would be worth the effort if you only witnessed the double hammer-beam roof. You can still see the 29-foot, oak table where Sir Francis Drake used to dine. It was, reputedly, a gift from the Queen herself, felled in Windsor Forest and floated down the Thames to be installed before the hall was finished. The ‘cup-board’ where barristers stand to enter their names in the Inn’s book is said to be made from the hatch cover of Drake’s ship the Golden Hind. The first-recorded performance of Shakespeare’s Twelfth Night took place here in 1602.

Of course, most of the Bard’s plays debuted in actual theaters but, as places of ill-repute and thought to encourage plague, were mainly outside the City walls.

Most theatres were south of the river in Southwark, a dangerous world of brothels, bear-baiting, pick-pockets and gaming dens. The Rose Playhouse, built in 1587, by Philip Henslowe, was the first theater at Bankside. Plays performed there included Marlowe’s Doctor Faustus, Thomas Kyd’s Spanish Tragedy and Shakespeare’s Henry VI  Pt I and Titus Andronicus.  The Rose was rediscovered in 1989 during excavations for a new office block and became a major news story. The office block was built but the theater’s remains rest underneath. You can still visit, or even enjoy a performance there.

The original Globe Theater was partly excavated some years ago. Alas, the foundations have been built over but if you walk to Park Street, its shape is marked out in the ground, along with some excellent explainer-boards. Of course the best way to experience Shakespearean theater is Shakespeare’s Globe, built by actor Sam Wanamaker, as authentically as late 20th century building regulations allowed. Summer sees open air performances, but with the addition of the gorgeous, jewel box-like Sam Wanamaker Jacobean Playhouse, candlelit indoor plays take place all year round.

North of the river, but still outside the City walls, an exciting discovery in 2011 delighted and frustrated Shakespearean scholars in equal measure. Delight came from the discovery of the legendary 1577 Curtain Theater, the boards of which were not only written for by Will Shakespeare, but also on occasion, trodden by the man himself. The frustration came because history books had to be rewritten. Unlike the Rose and Globe, the Curtain was not polygonal, but rectangular, similar to a modern theatre. A large-scale excavation revealed all manner of exciting material, including original money-boxes used to collect entrance fees (hence ‘box-office’) a floor paved with ox bones and even a birdcall whistle. Could this last object have been used to replicate the lark in Romeo and Juliet? We know it was performed there–and it may be again. The developers constructing apartments and offices on the site have changed their plans to incorporate the discoveries in a heritage centre that will once again host performances. The London of the second Queen Elizabeth has certainly not forgotten the bustling capital so enjoyed by the first.