Time travel with a visit at William Straw's house 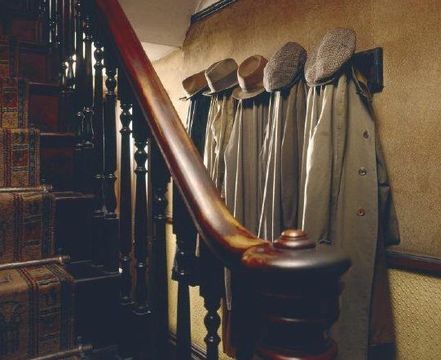 A secret hides within the red-brick Edwardian semi-detached house. It looks like any other residential dwelling on the street, no different from thousands of others in the Nottinghamshire town of Worksop. Open the door of 7 Blyth Grove, however, and you step into a time machine, transporting you back to the 1920s.

The story of this peculiar property began when William Straw, the owner of a local grocery shop, moved his family into the house in 1923. His wife, Florence, in her 50s and having lived most of her life above the shop, looked forward to finally running her own home. She oversaw an enthusiastic program of improvements: the electrical system was modernized, an up-to-date bathroom and kitchen installed, the house was decorated throughout with new carpets, wallpaper, and paint. It was the height of contemporary fashion.

And there it stayed. The happiness of the Straw family’s home was shattered, however, when in 1932 William died while tending the spacious garden. The brokenhearted family did not want to remove any of his possessions; his coats were left hanging in the corridor, and his pipes and tobacco remained by the fireplace in the dining room. The 1932 calendar next to the fireplace was never replaced with a new one. Time began to stand still.

Grief-stricken Florence was no longer the modernizer that she had been when the family first moved in. She now spent a lot of her time in the sitting room, alone with her thoughts. After she died in 1939, the room was also left largely undisturbed. The curtains were drawn and rarely opened again. Her Bible remained on the table and her music scores sat on the piano stool.

The house now belonged to the couple’s two bachelor sons, William Junior and Walter, who lived there together for the next 50 years. Averse to change, they altered very little in the decades that they occupied the house. No telephone, television, radio, central heating: they were content to live just as they had when their parents were alive. They retained their mother’s Baby Daisy vacuum cleaner that required two people to operate; one to pump the bellows, one to clean with the hose. Search in the lumber-room at the top of the house and you’ll still find it.

Not only did they refuse to keep up with the times, but they were also loath to throw anything away. Piles of old papers and correspondence litter the house. The two spare bedrooms contain many artifacts and trinkets, including a World War II ARP helmet. William’s hairbrush lies in the bathroom, its bristles worn away after years of use, never replaced with a new one.

What greets the modern visitor to Mr. Straw’s House is the home as William Junior and Walter knew it—packed to the rafters with an eclectic mix of possessions. Some obviously had sentimental value. A leather Gladstone bag in the walk-in cupboard, embossed with the initials WS, was a present from Florence to her husband on their wedding day. A small rocking chair in William Junior’s bedroom was a present his mother received on her fifth birthday. But other items are more mundane and domestic: Leather shoes stuffed with newspaper, old tea chests from the grocer shop, boxes, and crates containing a lifetime’s clutter.

It wasn’t a shortage of money that caused the Straws to hoard as much as they did. The brothers were financially comfortable, having inherited their father’s business along with the house. They had a life of regular routine; each morning Walter cycled away to look after the grocery shop, while William stayed and maintained the home. In the evening, each would retire to his chair by the fire to discuss the day’s events and read the newspaper.

Both brothers attended nearby St. John’s Church and William wrote a book to mark the church’s centenary in 1969. Copies of the book are stacked on top of the bed in his parents’ bedroom; perhaps they didn’t sell as well as William hoped. As somebody who makes a living through the written word, I have great sympathy with him!

Walter died in 1976, leaving William Junior alone for the final 14 years of his life. Even so, his chair remained in situ next to the fire, where William read the newspaper alone. When William died in 1990, the family line ended with him. William left the contents of the house to the National Trust, despite being too frugal to pay for membership for himself while alive.

When National Trust staff arrived to assess what Straw had given them, they were staggered by the wealth of material they found. The Trust used other money to purchase the property and decided to display the house as they found it. The neighboring house, number 5, was also purchased to provide space for displaying many of the objects that would otherwise have remained unseen, stuffed into drawers and cupboards.

What a good decision the Trust made. Wandering around the rooms of the house, it’s possible to piece together the lives of the Straws, a typical, if slightly eccentric, working-class family. A glance at the food in the cupboards indicates that William Junior had the palate you might expect of a pensioner in the 1980s—tinned herrings and sardines, Heinz baked beans, Fisherman’s Friend sweets. And he must have really liked Bovril—there are jars and jars of the stuff.

The fare is a little more appetizing in the small café that forms part of the visitor center in number 5. Enjoy a cup of tea and nose through the Worksop Guardian, just like the Straw family did during the 70 years they lived next door. Take your cake into the gardens to look at Walter’s cacti collection or pick fruit from the trees, just as the Straws did for their homemade jams and preserves.

Poking around 7 Blyth Grove is fascinating, a chance to uncover the lives of the family that once lived there. Did Florence’s grief over the loss of her husband kick-start the process by which the house was preserved? Were the boys trying to create a shrine to their father and mother? Did they always intend to create a historical record for future generations, befitting their interest in local history? There are clues scattered around the house in abundance to help historians solve the puzzle of why this became the house that time forgot.

How to visit Mr. Straw's

Mr. Straw’s House can be found at 7 Blyth Grove, Worksop. If arriving by car, be aware it is on a quiet residential road (that’s why the Straws moved there, after all), but it’s close to Bassetlaw Hospital, so follow signs for there. By train, the station is about half a mile away by taxi. Rail services operate to Sheffield, Nottingham, and Lincoln.

Given the size of the house and to prevent damage to its many artifacts, admission is by timed ticket only. The house is open from March to October, closed during the winter. Check opening hours at www.nationaltrust.org.uk/mr-straws-house.