Traveling through the history of Britain's textiles 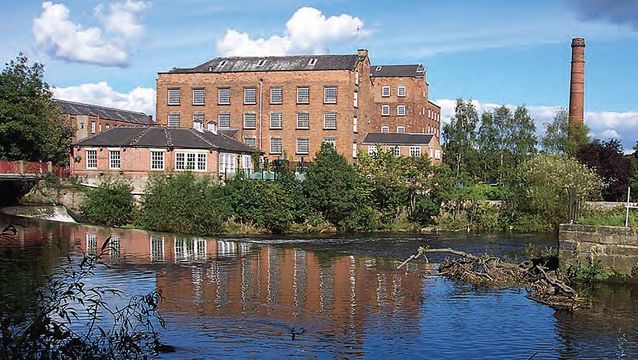 Like all the 18th and 19th-century textile mills, Darley Abbey Mills sits next to a river—the water providing the power that drove its vast machinery. DERWENT VALLEY MILLS

The wools, silks, and cotton mills of Derbyshire, Yorkshire, Cheshire, and Wales: A guide to the regions and places that created textiles.

To highlight the importance of woolen exports, King Edward III (1327-1377) commanded the Lord Speaker of Britain’s House of Lords to preside from a the Woolsack. It’s no utilitarian sack of wool, but it’s not very fancy either: merely a red-covered wool-stuffed seat without arms. Modern historians agree with King Edward, calling wool “the backbone and driving force in the English medieval economy.”

You can still see the profits it produced in the lovely wool churches of East Anglia and the Cotswolds, built by wealthy wool merchants and soaring like mini-cathedrals over small towns such as Northleach and Cirencester in Gloucestershire and Lavenham in Suffolk.

Similarly, the enormous 19th-century town halls of northern cities such as Manchester and Bolton witness the prosperity spun by the cotton factories of the Industrial Revolution. Cotton is easier to work by machine than wool, and so from 1803-1939 cotton goods were Britain’s most valuable export. But making wool cloth remained a major industry, and England also had its silk and linen mills. The wealthy grandees of these textile industries financed art galleries, concert halls, churches and schools—many still in use today.

Yet while the cotton bolls decorating the tile of Manchester Town Hall and the carved sheep of medieval churches witness the sources of their founders’ wealth, to see what made so many extraordinary buildings possible, you have to go the mills where the textiles were made.

Wool, cotton and silk mills once packed the northern counties of Derbyshire, Yorkshire, Lancashire and parts of Cheshire, while isolated mills were also built in mountainous regions, where rushing rivers produced power for the looms, and local demand created a market. A few mills still function. Others have become museums preserving the artifacts of the Industrial Revolution and the society it generated, while some have new roles as cultural institutions.

Visiting them opens windows onto the technological innovations of the 18th and 19th centuries, the back-breaking work done by generations of spinners, weavers, loom operatives and children, and the links that connect Britain’s textile mills to America’s fields and factories.
Here are some textile-making regions and mills that are especially interesting to visit.

Derbyshire saw the birth of the factory system that became the typical 19th-century way of manufacturing, and the area included in the Derwent Valley Mills UNESCO World Heritage Site is home to many innovations in machinery and production methods. It runs for about 15 miles northward from Derby to Matlock Bath, and includes the towns of Belper, Cromford, Milford and Darley Abbey. John and Thomas Lombe, sons of a Norwich weaver, built England’s first water-powered silk mill in Derby in 1721, while Richard Arkwright’s invention of the water-frame and the building of his water-powered spinning mill in Cromford in 1771 initiated the continuous spinning of cotton. 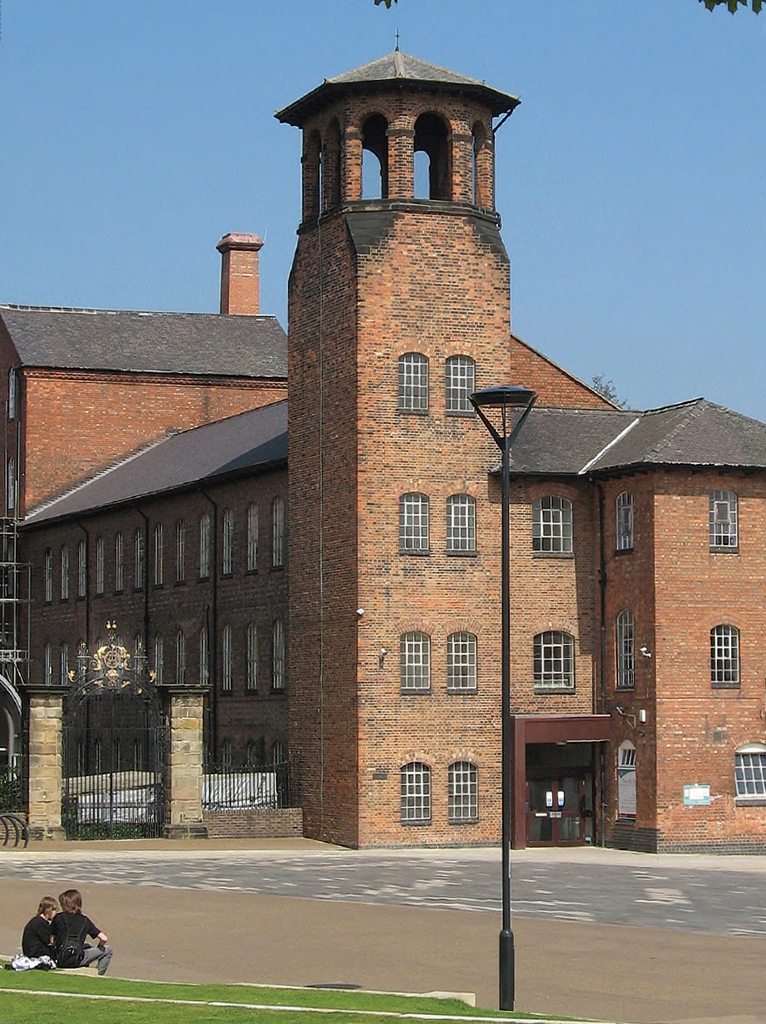 The mass production of yarn by machines manned by unskilled operatives demanded a big workforce. To attract workers, Arkwright built houses for them, thus initiating the tradition of brick factories surrounded by brick workers’ houses that dominated 19th-century mill towns. Many of these workers’ villages lie within the World Heritage Site. Visitors to the area can also see the Cromford Canal and Cromford High Peak Railway, which transported supplies and products, Lombe’s mill, now the Derby Industrial Museum, and Richard Arkwright’s Masson Mill—now a shopping village with 60 stores and cafes—plus numerous other sites within this heartland of the Industrial Revolution. 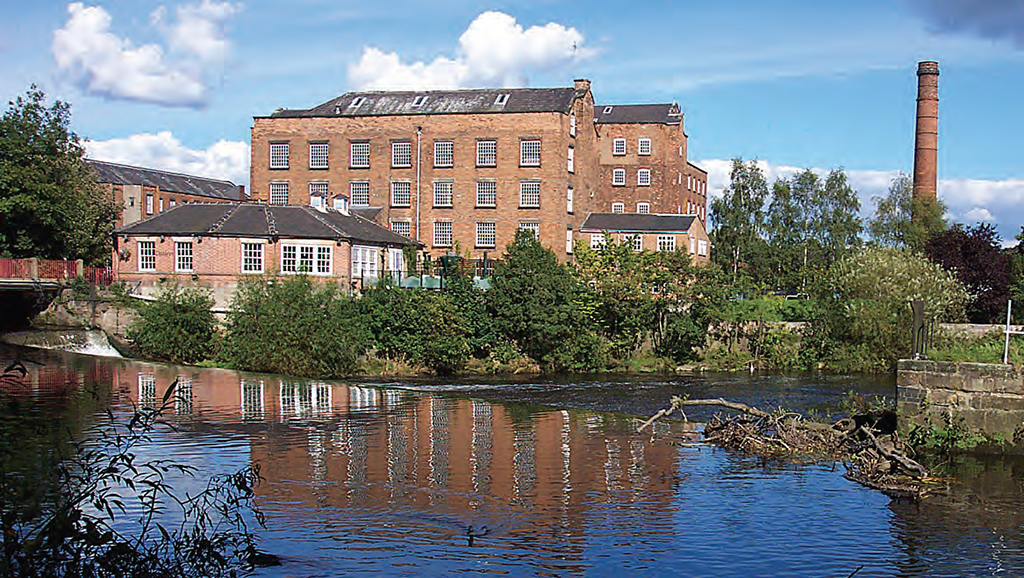 Like all the 18th and 19th-century textile mills, Darley Abbey Mills sits next to a river—the water providing the power that drove its vast machinery. DERWENT VALLEY MILLS

Records of ropemaking in the Yorkshire Dales village of Hawes date back to the early 18th-century, when rope was essential to local farmers, as well as in mines, factories, and ships. Outhwaites has been in business since 1841 and thrives as a manufacturer of rope, braid, cord, and twine for purposes ranging from bell ropes to dog leashes. The longest ropes used to be made on the outdoor ropewalk, and still today the company uses the parking lot when an especially long rope can’t be made indoors.

Visitors see the ropeworks during its everyday operation. The staff may be making bell-ropes for churches, plush banisters for theaters, draw-cords for jackets, braids for bag handles or wicks for candles. Materials include cotton, jute, hemp and synthetics. Lots of historical and technical information is posted on walls, and the friendly workers are ready to explain what they are doing. Dog lovers may not be able to leave without a colorful leash; craftspeople will want to gather cord for macramé, while anyone fascinated with knots can try their skills on the knot board. 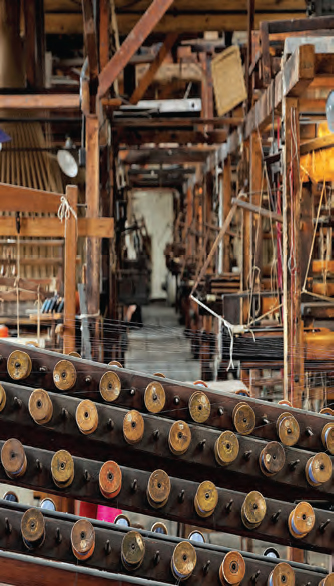 When winter reduced work in the fields, farm families near the Cheshire town of Macclesfield spent their time making wooden buttons covered in coarse thread twisted in patterns. Meanwhile, in London 18th-century fashionistas swooned over silk-covered buttons from France. They were expensive; so, in 1740 local merchants that traveled to London realized they could bring back silk thread and have buttons made cheaply in Macclesfield. Thus began the Macclesfield silk industry.

In its 19th-century heyday, more than 100 mills made silk in Macclesfield and the surrounding towns. Macclesfield was also home to independent weavers making shawls and ribbons in garret houses that had a third-story workroom with large windows so they could see their work. Such houses still stand near Paradise Mill and Silk Museum, where you can learn about the silk business, from silkworm to the silk ties and parachutes that made Macclesfield famous. In Paradise Mill, visitors see the silk looms in operation. Also on display are 26 Jacquard looms—one of the world’s largest collections—and the punch cards that enabled them to make brocades and other elaborately patterned silks. The neighboring museum traces the history of silk and also hosts exhibitions of local arts—often needlework of various kinds. Emigrants from Macclesfield are credited with helping found the silk industry of Paterson, New Jersey.

Until 1784 Styal was a remote Cheshire farming village. But lying only 12 miles from Liverpool, the main port for raw cotton from America, and close to the Bollin River that provided waterpower, it was an ideal spot for Samuel Greg to build Quarry Bank Mill. Styal soon became an industrial outpost making cotton cloth. It had a school, bakery, churches and the mansion and gardens of the Greg family. In 1820 half Greg’s workers were children, bound by apprentice contracts that specified wages of 9 pence a week for first year and a shilling for the next four years – this for more than 60 hours work a week, plus unpaid overtime for any infraction of the numerous rules. Visitors to Quarry Bank, now owned by the National Trust, can enjoy both a self-guided tour of the mill and a guided tour of the Apprentice house, where the children lived. The site also has several well-marked walks. You can meander the pretty site, strolling by the 1820 workers’ cottages, the Unitarian chapel, the waterwheel pit, and on into woodland and gardens. 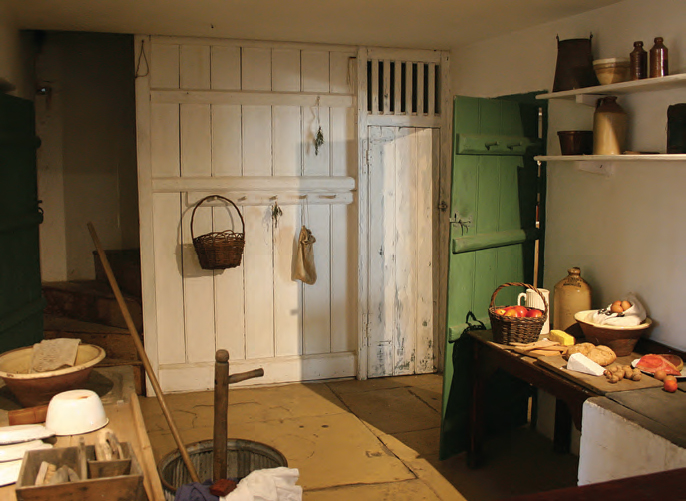 Though the basic principles of turning fibers into cloth are similar, each textile has its own demands. The wool of South American alpacas was particularly intransigent because it is furiously tangled. In 1836 Titus Salt, a Bradford woolen manufacturer, took abandoned bales of Peruvian alpaca from a Liverpool warehouse, and developed ways to card, spin, and weave it with a cotton or silk warp to make delicately sheened alpaca cloth. Its warmth and lightness made it a Victorian favorite for cloaks.

Salt’s ingenuity did not stop there. He decided to build a new mill and accompanying village in the country outside Bradford. Salt’s Mill is enormous, yet unlike the typical dark satanic mills of Bradford, it is well-lit by multitudinous windows. The American Harper’s New Monthly raved about its 12,000 looms producing 5,688 miles of alpaca. Salt’s Mill also produced cloth from wool, cotton, linen and hemp.

Today it is a multi-purpose venue: home to a technology company, offices, bookshops, cafes, performance spaces, and art exhibitions. The paintings of David Hockney, who was born in Bradford, are always on display, because Hockney regularly sends his newest work there. Currently, his “Arrival of Spring” documents the changes in the Yorkshire landscape during each day of May. Saltaire, the workers’ village, has a school, library, concert hall, and indoor laundry where residents could wash and hang their clothes. (Titus Salt did not like to see washing dangling from outdoor lines!)

Set in the lovely idyllic Conwy Valley, Trefriw Woollen Mill is a working mill using wool from Wales’s four million sheep to make tweed and, most importantly, the tapestry bedspreads traditionally given as wedding presents in North Wales. It also operates as a museum that includes a weavers’ garden of dye-producing plants, a spinning shop, workshops that take the wool from its raw state through the processes of cleaning, carding, spinning, dying, and finally weaving.

As well as bedspreads, the hardwearing-cloth is made into handsome jackets, pillows, table mats, and tea cozies—all of which can be bought in the well-stocked retail store.
Originally a fulling mill where farm-wives and weavers brought their cloth to be washed in the River Crafnant, today’s water-powered mill was created in the early 19th century and bought in 1859 by Thomas Williams, who enjoyed the facilities of a nearby spa. It is still owned by his descendants. The shop and turbine house are open all year, with the weaving floor and the museum open to visitors from February to October.