A week-long itinerary to explore Durham, Northumbria and the Borders 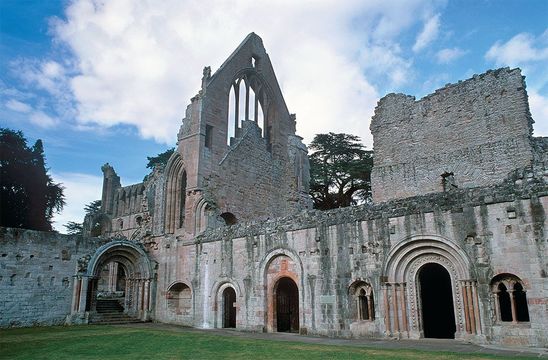 In the prettiest setting of the four great Border abbeys, Dryburgh Abbey is still a place of pilgrimage—to the final resting place of Sir Walter Scott.PhotoLibrary.com

Here is a diverse, sparkling regional discovery of the ancient kingdom of Northumbria and the border country punctuated by centuries of conflict. This is the land of Prince Bishops and Border lords.

We begin our road trip by fast train from London Kings Cross to the great cathedral city of Durham. Here a group of monks brought the relics of St. Cuthbert to their final resting place at a secure peninsula in the River Wear. Durham Cathedral and its adjacent Castle were the great fortresses of church and state in the North Country into the 18th century. With an early afternoon arrival there will be time to explore this seat of the Prince Bishops: majestic Durham Cathedral with its 900 years of history, Durham Castle, the River Wear, the university and the narrow streets around Palace Green and the Market Place. There are plenty of options for accommodations in the center city. The TIC will be happy to help at www.visitdurham.co.uk.

Day 2–Meandering up to Beamish

Pick up your rental car after Durham’s modest rush hour this morning. Today features an excursion to Beamish, the acclaimed North of England Open Air Museum just up the A167 near Chester-le-Street. Northern England’s social and industrial history is brought to life in the farms, town and colliery village at this award-winning recreation and restoration. This is one of British Heritage’s 30 must-see visits in Britain (September, p. 30). Return to Durham with time to stroll the river walks along the Wear or take in a bit of shopping. You might also take in choral evensong at Durham Cathedral. ‘Twill be an experience you’ll never forget.

We head into the northern wilderness today, first on the A691 and A68 to Hexham—voted England’s best market town—and then a Roman visit to Chesters Fort along Hadrian’s Wall—the farthest outpost of the Roman Empire. Regain the A68 north across the bleak Cheviot Hills, across Northumberland National Park and Redesdale Forest before crossing the Scottish Border. An afternoon visit to acclaimed Jedburgh Abbey, before we continue on the A698 to the market town of Kelso. An alternative base might be the quieter village of Melrose. Both have a variety of well-located lodgings. You can always check out accommodation at www.visitscotland.com.

Today’s excursion takes us under the majestic Eildon Hills. We visit Dryburgh Abbey and Abbotsford, the baronial, evocative home of Sir Walter Scott, Scotland’s most famous novelist and champion of Scottish culture. From here, the great writer created the romance of Scotland and influenced its development like no other single individual in history. By most reckonings, Scott virtually began Scotland’s tourism trade. Explore the old village of Melrose as well; this is the quintessential Border town. Melrose Abbey is the prettiest of the Border Abbeys, and where the heart of Robert the Bruce lies. It’s an easy return to Kelso, and there is plenty to explore in its shops, restaurants and townscapes. Or walk the banks of the Tweed.

Day 5–Along the Tweed and South to Alnwick

The road lies east this morning, as we steer for the North Sea. We’ll follow the River Tweed to its mouth at Berwick-Upon-Tweed, the historic seaport with its 16th-century ramparts. Over the centuries, the very independent town of Berwick has switched allegiance between England and Scotland many times. Take a morning stop perhaps to look around the pretty town of Coldstream, original headquarters of the Coldstream Guards in 1659. You might detour a few miles south to visit Etal Castle and its great display on the nearby battlefield of Flodden, where the “flower of Scottish nobility” was cut down in 1349. Check out the battlefield yourself. This afternoon, we turn south again into Northumbria and follow the A697 south, to the Northumbrian market town of Alnwick. There should be time for tea or a pint, and a look around the town that grew up in the shadow of Alnwick Castle. The classic place to stay is the White Swan Hotel, with its 300 years of history.

Today’s excursion takes us back along the coast a few miles on the A1 to Lindisfarne, often called the Holy Island. Missionaries from the Hebrides settled here with their first bishop in 635. Home of the famed Lindisfarne Gospels and one of the earliest Christian settlements in England, the ruins of the Benedictine priory and 16th-century castle dominate a stark island teeming with bird life. You’ll have to time your visit with the tide chart to take the causeway over from the mainland. Take the coast route south past magnificent Bamburgh Castle (pay a visit if it’s open). Pause perhaps in a pub in the pretty (if chilly) North Sea beach town of Seahouses. This is scenic Northumbrian coastline at its best. You can thread back to the A1 at several points south. An afternoon return brings a visit to famed Alnwick Castle, home of the Duke of Northumberland (and its unusual gardens), and time to shop or wander and investigate this ancient market town. 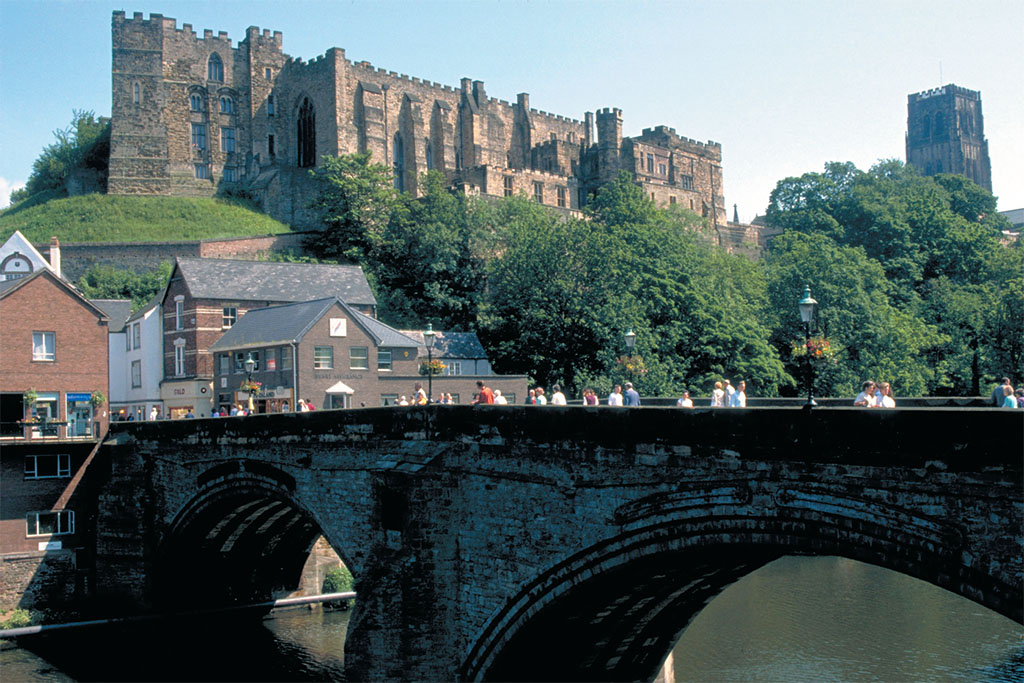 Durham’s castle and cathedral stand in easily defensible positions at a U in the River Wear. via PHOTOLIBRARY.COM

Day 7–A Return to the Present

Today marks a return to London. Time this morning to drop off the rental car in Durham (or perhaps even Newcastle) and catch a train for London King’s Cross. If you have more time, then you could work your way south or explore such County Durham delights as Barnard Castle and the magnificent Bowes Museum.