All the white horses - the history of Britain's chalk hillsides 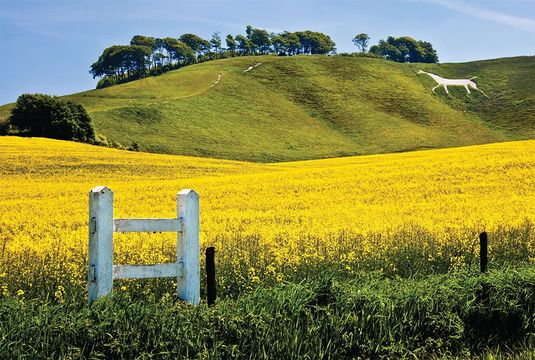 The Cherhill White Horse, above the flowering rape field, is a familiar sight along the A4 between Marlborough and Chippenham.Anna Stowe / Alamy

From honoring King George to artistic expression here's everything you need to know about Britain's incredible white chalk horses and walkers or warriors.

On March 12, 2012, in the Dorset village of Osmington, local resident Geoff Codd was relieved that the fog was clearing so he could “finally see the horse looking through the clouds.” Both the village and the horse were expecting a Royal visitor.

The “horse” is a depiction of George III’s horse, Adonis, with the king astride, cut into the turf of the hillside to expose the chalk beneath. On a clear day, at 100 yards high, the gleaming white horse is visible from the coast at Weymouth, five miles away. The carving dates from 1802 when a local landowner commissioned the horse to honor the king, who often rode in the area. 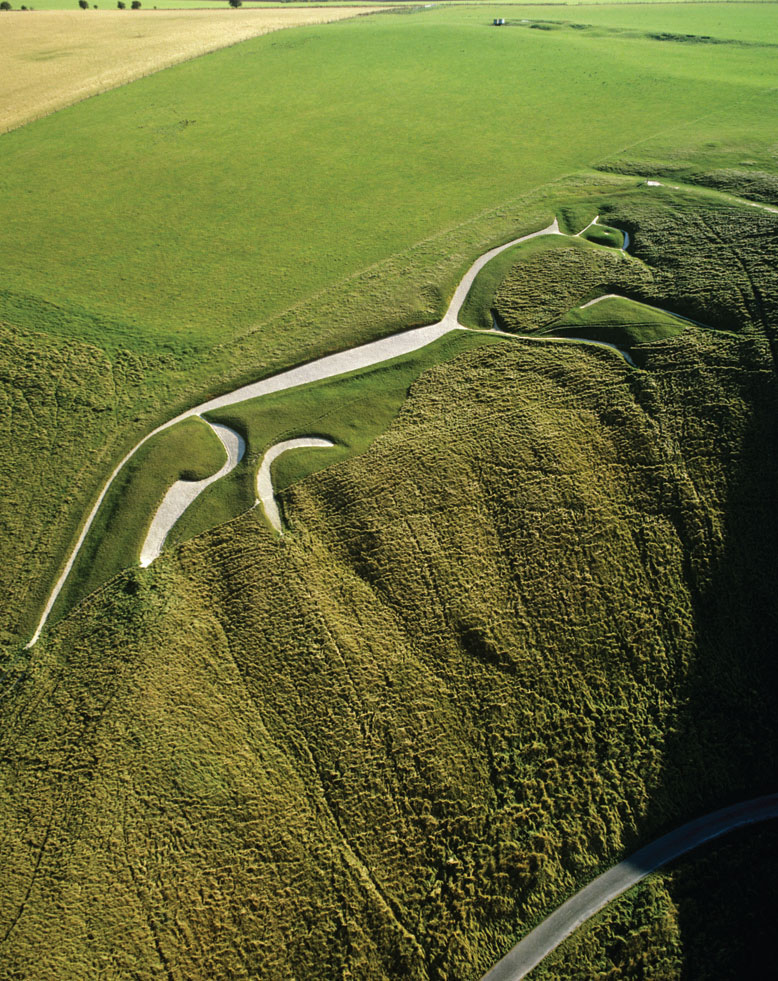 The elongated Uffington White Horse dates from the Bronze Age, though its chalky neighbors are newer. SKYSCAN PHOTOLIBRARY/ALAMY

Two centuries later Weymouth was chosen as the 2012 Olympic sailing venue. Codd and fellow villagers thought that their horse was too bedraggled to meet the world’s press. “We were totally naïve as to what was involved,” says Codd, who led the restoration project. Two years’ hard work included historical analysis as well as removal of turf and stone on a huge scale. Royal Navy Sea King helicopters, local army cadets and scouts worked on the steep site in all weathers. Incredibly the group sustained only one broken ankle and one broken toe during the project.

Because George III had become too ill to ever return and see the horse, villagers today were hoping to honor the creators with a royal visit. The Royal helicopter landed when the fog cleared, allowing George III’s descendant, Princess Anne, to meet villagers and horse alike. 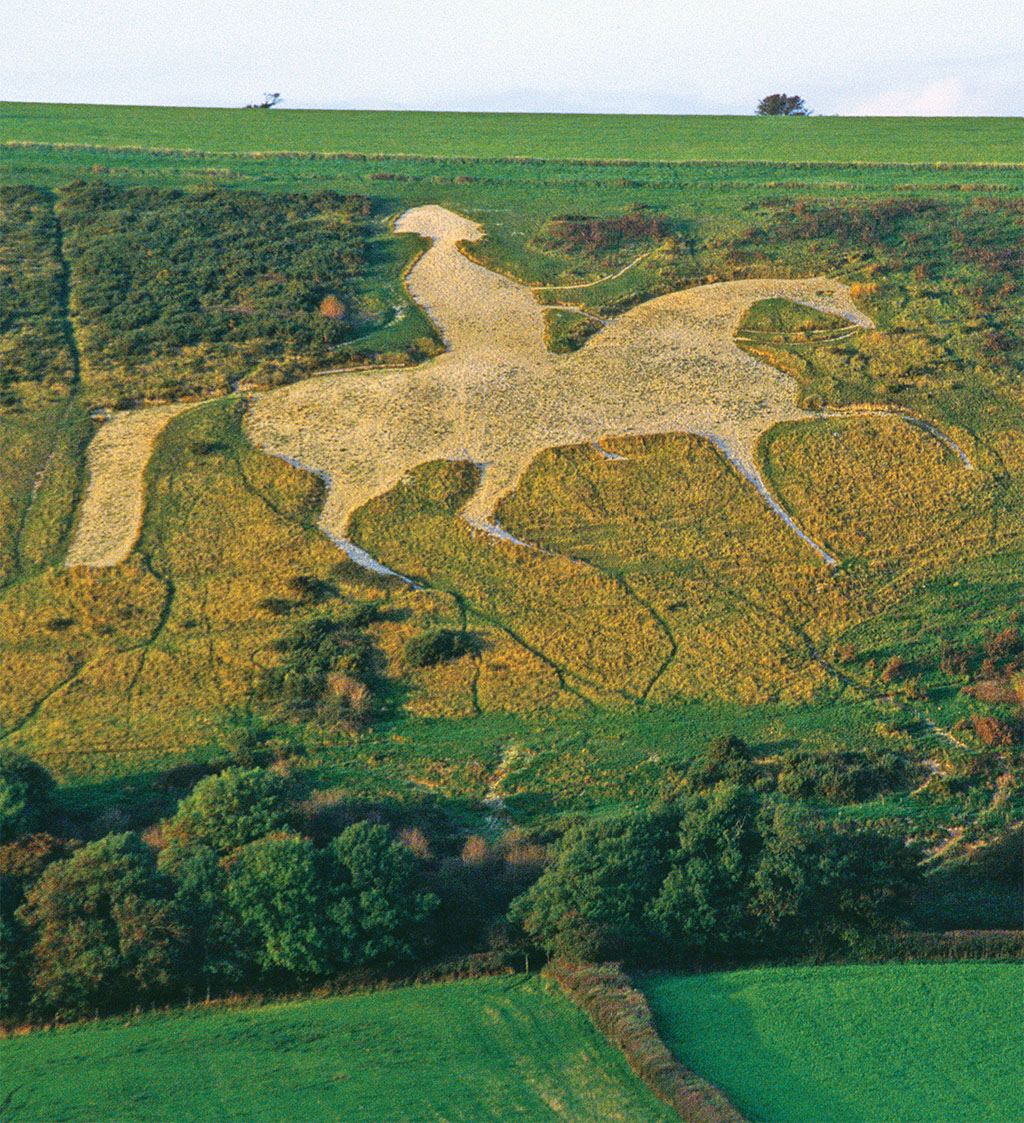 Bear Hotel - A Devizes landmark on the large market square. Open to nonresidents for afternoon tea or a pint. Wadworth Brewery, based in the town, delivers to several counties, but in Devizes all deliveries are still made by shire horse and cart.
www.bearhotel.net

The large band of chalk bedrock across southern Britain offers the perfect terrain for creating such white horses and other creatures. Most roam the hills of Sussex, Wiltshire, and Dorset, with a few outside the main corral farther north.

The granddaddy of them all has been part of the Oxfordshire landscape for 3,000 years. The Uffington Horse stretches 374 feet from the front hoof to tail. Its stylized shape was often taken to be a dragon, in fact, the very dragon killed by St. George on nearby Dragon Hill. Other local myths claim that it visits a local well every night and every 100 years gallops across the sky to a nearby farrier. Archaeologists, however, believe it was originally the symbol of a prehistoric tribe staking their land rights.

The horse sits on the Ridgeway, Britain’s most ancient road, that connects to other Bronze Age landmarks—hill forts and burial mounds. High on the hill, the horse still attracts attention. Last year, local people woke to see a huge jockey astride the horse, made from canvas and tent pegs. Luckily the publicity stunt, carried out with night vision goggles, was removed with no harm done. 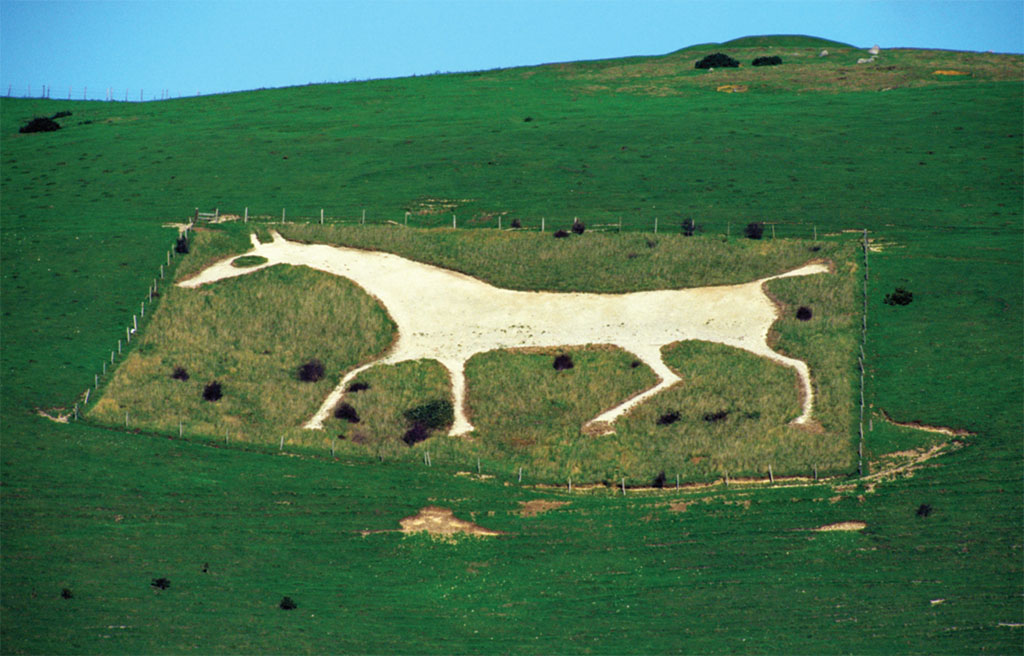 The Alton Barnes White Horse is one of eight such chalk horses galloping across the hills of Wiltshire. HIDEO KURIHARA/ALAMY

Wiltshire is the best area to look for chalk horses galloping across the county’s, particularly striking landscape. Here the soft limestone has gradually eroded into rounded hills and valleys that drop away into folds and swirls. From eight hills horses look down, created by landowners as striking follies and often commemorating a coronation. Most were created in the 17th or 18th centuries, but the British are still cutting into their hills even now. The new horse at Devizes was created to celebrate the Millennium. At Folkestone, another recent filly overlooks the Eurotunnel.

More realistic horse shapes started to be used in the mid-18th century, inspired by the work of George Stubbs, the British painter of horses. Translating such artistic ideals onto a windy hillside, however, is not easy. The Cherhill horse was created in 1780 by Dr. Christopher Alsop, known as the “Mad Doctor” (probably for creating the horse in the first place). From more than a mile away from the hillside, he shouted instructions through a large speaking trumpet to men marking out the shape with white flags.

With the shape complete, help may still be needed to make the horse white. Large teams ram down additional pieces of chalk with sledgehammers, sometimes adding lime for brightness.
Holding back nature is also an ongoing problem; some horses have disappeared altogether. Each village has its own approach to keeping the edges defined—a bit of extreme gardening. Scouts regularly abseil down the face of the Cherhill horse, cheerfully weeding as they go. Even the pupils of an exclusive private school, Marlborough College, clean their local horse. Maybe alumni such as William Morris and John Betjeman once picked up a trowel or spade?

Bridge House Hotel Beaminster, Dorset - This Tudor house, complete with its own priest hole, offers beautiful accommodation. It has a well-deserved reputation for excellent food, including the locally farmed snails! A great location within a short drive of both the Cerne Abbas giant and the Osmington horse.
www.bridge-house.co.uk

Parklands Hotel Ogbourne St. George, Marlborough, Wiltshire
Well-placed in a quiet pretty village for the Wiltshire Horses, Avebury Circle and Devizes. Mark and Nicola are very welcoming and happy to advise on how to get the most from your trip.
www.parklandshoteluk.co.uk

Sometimes gardeners can’t stand weeding any longer. A team at Westbury in the 1950s took a more radical approach, concreting over the turf altogether, although staying faithful to the original shape from 1778. Having a regular lick of white paint ensures it shines out like a beacon on a very breezy hillside.

Two human-shaped giants also stalk the land. The Cerne Abbas Giant looks down on the village of the same name in Dorset and the Long Man of Wilmington can be found in East Sussex.

The naked Cerne Abbas giant has been the source of much debate over the years as well as more than a few blushes. A mockery of Oliver Cromwell is one theory. Others are convinced that the giant is another ancient figure inspiring pagan ceremonies.

In a recent guidebook, Sacred Britain: A Guide to Places That Stir the Soul, a resident is asked her opinion on the giant’s age. “By the look of him, I would say about 18, or in his early 20s at most. And he has been since time immemorial.”

The Long Man of Wilmington is also seen as a fertility symbol by some groups. Druids and Wiccans still worship there. At dawn on May Day, the great figure’s own Morris Dancers, Long Man Morris, honor him by dancing below his feet. They also help with more practical matters of “scouring” the giant. Yes—more weeding.

The horses also inspire celebrations. At both the winter and the summer solstices, candles and torches illuminate the outline of the horse near Alton Barnes as the sunsets.

In 2012 the Alton Barnes horse also celebrated its 200th birthday. As part of the Salisbury Arts Festival, walkers covered 100 miles visiting all eight horses, culminating in more torch-lit processions. Along the way they met writers and experts, including David Dawson, director of the Wiltshire Heritage Museum in Devizes. “Local communities have enormous pride in these landmarks,” Dawson says. “It is their horse.” Walkers also heard “War Horse” read by author Michael Morpugo. The horses even merited a new work from Poet Laureate, Carol Ann Duffy. 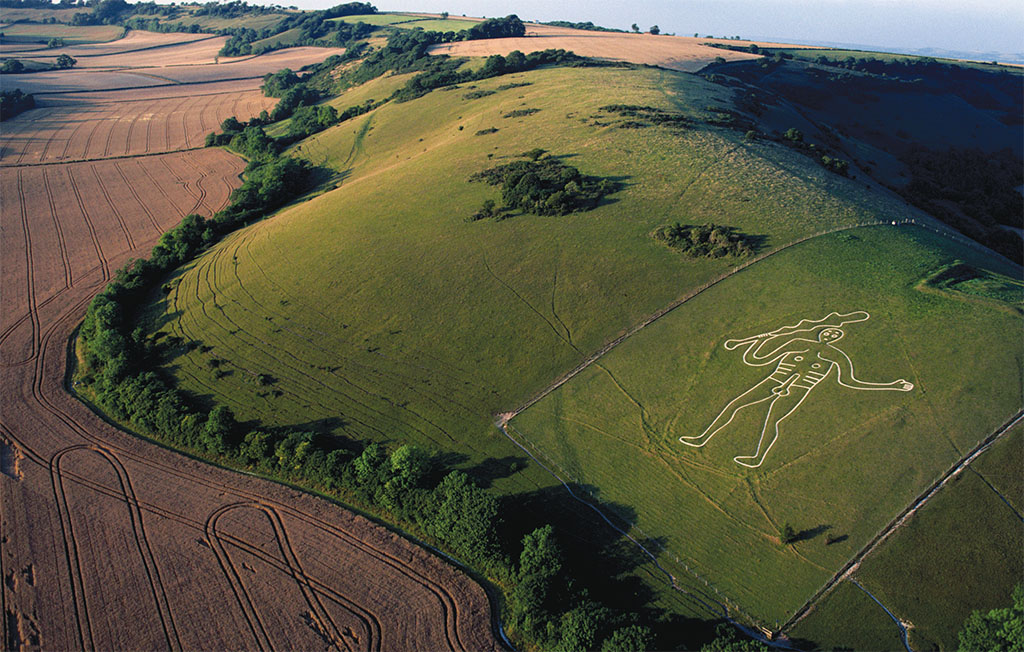 Wiltshire’s ancient history also includes the largest stone circle in the world at the Avebury World Heritage site. Nearby are famous examples of ancient burial mounds and tombs—Silbury Hill and West Kennet Long Barrow. Several of the horses are within 30 minutes’ drive of Avebury and nearby Devizes. Visit the charming Wiltshire Heritage Museum in Devizes for the more on the area’s history. 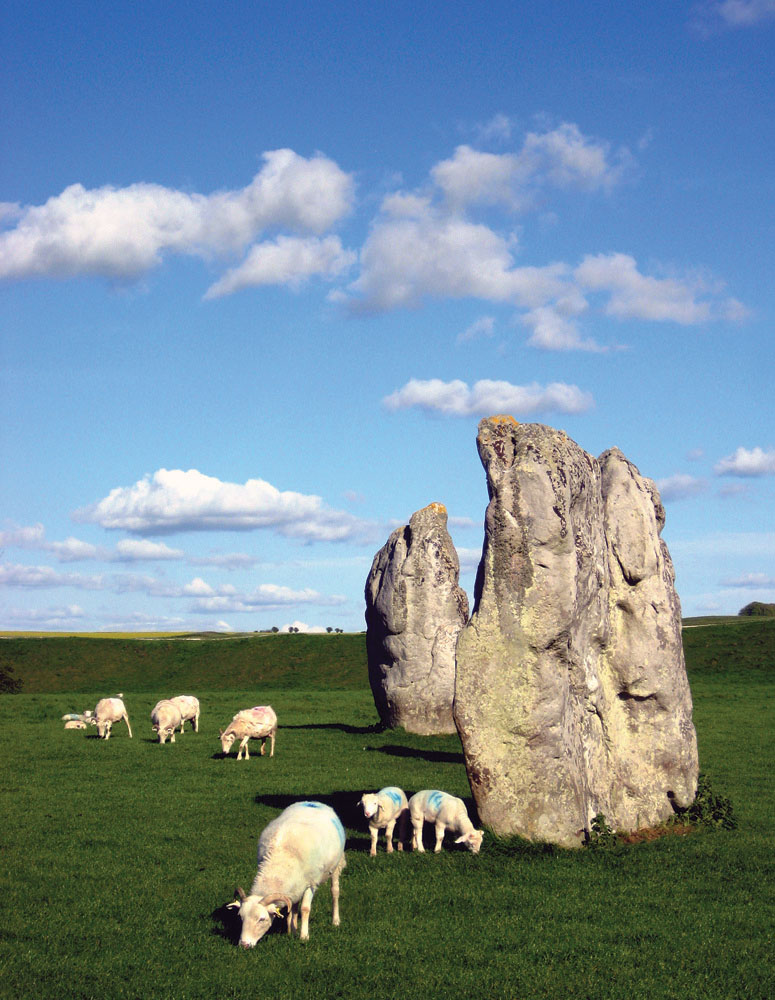 In the center of white horse country, Avebury Stone Circle was scrubbed from limestone subsoil as well. REBECCA GARDNER

You don’t have to hike for miles to see these creatures. The viewing point for the Cerne Abbas Giant is accessible by car and five minutes’ walk from the delightful village and a pint at the Giant Inn. The Westbury Horse is a few hundred yards from its closest car park, as is the Uffington Horse, although the short walk is a lot steeper. After such a climb the views are a great reward, as is Sunday lunch at the Fox and Hounds in Uffington. In fact, the 3,000-year-old horse is visible without even leaving the beer garden.

Back at Osmington, an official viewing point is planned. Christine Codd, secretary of the restoration project, was walking past when she overheard a couple exclaiming, “What have they done to the white horse?!”

“When I explained, they thanked us for all our hard work and gave me a hug!” said Codd.
Many groups are inspired by the creatures on the hills: hikers, artists, Morris Dancers, archaeologists, the Druids and even the clientele at The Giant Inn. If you’re inspired to get on the trail, please let the Cherhill Scout group know if you’re available for a bit of “gardening.”