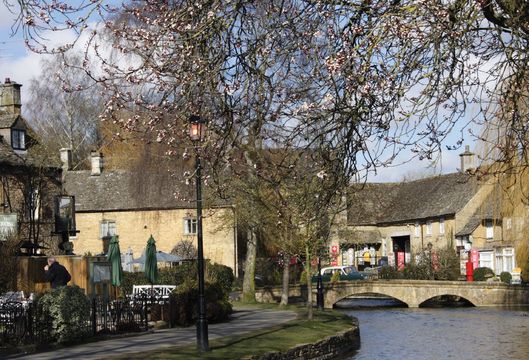 Join Dana Huntley on a leisurely and classic itinerary, who's joined by a companion who provided a set of fresh eyes to destinations he had visited many times.

Many of you who have been reading British Heritage for years are probably aware that I routinely made editorial pilgrimages to Britain each April and October. Every third issue, I have invited readers along with a travelogue of a trip’s adventures pursuing stories, taking pictures, revisiting old haunts, and meeting up with our writers.

This autumn for the first time in years I set a leisurely and classic itinerary and had along a companion who provided a set of fresh eyes to destinations I’ve visited many times.

The weather was gorgeous, with temperatures in the 50s and low 60s and lots of blue skies and sunshine. Eh, that’s not always the case in late October. Do come on along.

It was cold and gray as we landed at Heathrow in the early morning, picked up a car and joined the queue on the M25 heading to the southwest. From the M3 below Basingstoke we turned west across northern Hampshire on the A303, then into Wiltshire and on to the 12th¬century cathedral city of Salisbury. I’ve always loved this medieval small city of about 40,000. Both the cathedral and town were purpose¬ built in the 13th century. Its street design, butter cross, marketplace and churches have remained fundamentally unchanged over the centuries. Town and country blend harmoniously along the center city’s three rivers and adjacent water meadows. I’ve happily returned many times, but what brought me to Salisbury this time was the story a few pages on in this issue. We put up at the familiar Red Lion Hotel, within a few blocks of everything in the pedestrian-friendly old city center. 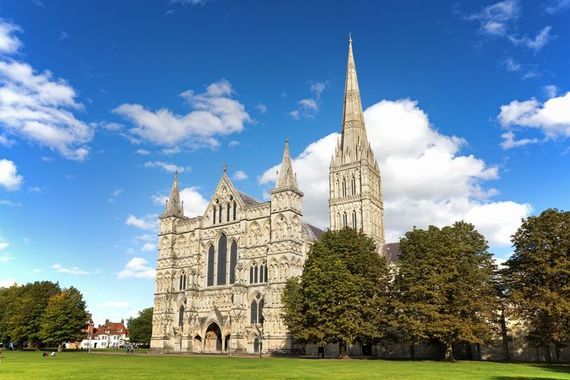 After a day pursuing the story and enjoying beautiful and prosperous Salisbury, it was a morning drive up to the Severn Crossing on the M4. At the western shore of the Severn estuary, Croeso y Cymru, “Welcome to Wales.” Our destination was the market town of Caerphilly, a dozen miles north of Cardiff at the base of the coal valleys. The old town center gathers around 13th-century Caerphilly Castle, the largest castle in Wales (and second largest in Britain). Its concentric moats are a magnet for local fishermen.

South Wales and what is known as “The Valleys” have long been dear to my heart. We met up that evening with old friends of mine, Norman and Carol Jarrett, for dinner at a local carvery. Norman and I met more than 20 years ago when he was secretary of the Aber Valley Male Voice Choir. For some years, I used to sit in and sing rehearsal with them when I was in the neighborhood. Every valley and market town has a male voice choir. Wales is, after all, the Land of Song.

Day 3 - In the Valleys of The Rhondda

Very few American visitors ever make it to the coal valleys. In a conventional sense, they aren’t pretty at all. Most famous of all is the Rhondda Valley, a Y-shaped valley that spreads out for 20 miles northwest from the market town of Pontypridd. We drove through lovely sounding towns like Treorchy, Treherbert, Maerdy and Ferndale, where communities run together – terraces of two-room-up, two-room down row houses rising up the steep sides of the narrow valley. No one lived beyond walking distance of a colliery, with a pit head and its winding engines. The coal mines all closed through the 1980s, though, and a way of life has faded away. Left behind are the chapels, workingmen’s clubs, miners’ institutes, rugby fields and poverty – the artifacts of an industrial and social history that was hard and proud. And what were the gray and black slag tips of the mines have been slowly turning the mountainsides green. The Rhondda Heritage Park just above Pontypridd tells the story well.

Many times I have taken folks on this drive up through the Great Rhondda, over the mountain (with some steep, treacherous turns) to Hirwaun and from Aberdare down the Little Rhondda. It never fails to impress with such a different picture of Britain from the green and pleasant, tourist-filled hills of the Cotswolds just 90 minutes drive away. And our next destination. 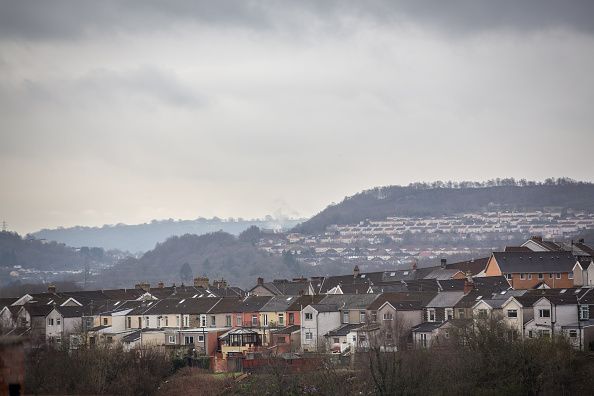 Valleys of the Rhondda

Day 4 - To the Capital of the Cotswolds

I followed the A469 north through the Rhymney Valley to the “Top of the Valleys Road” (the A4) and took that east to Monmouth, the county town of the small Marches county of Monmouthshire. It was great fun to rendezvous for lunch there with veteran BHT writer Sian Ellis and her partner, Dave, on Agincourt Square next to the statue of Charles Royce, of the eponymous Rolls-Royce.

This afternoon we drove through the Forest of Dean and around Gloucester to the market town of Cirencester, “Capitol of the Cotswolds.” By the time we settled into The Fleece Hotel on the Market Square – one of those great, old low-beamed coaching inns – shops were closing up around town. We had a fine supper at The Black Sheep, the oldest pub in town, while half a dozen dogs played at the feet of their owners. 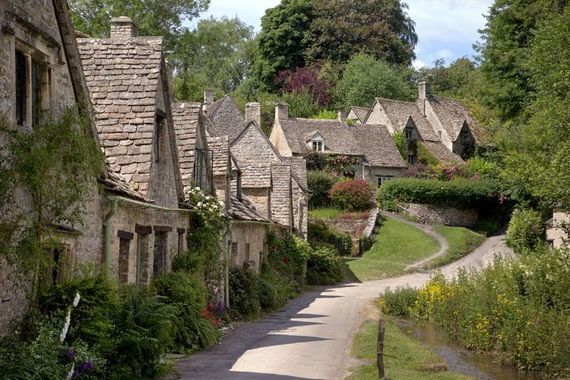 Day 5 - Hill and Dale to Stratford

With the car parked in the Market Place just in front of the hotel, I had to get out before 8 to feed a pound into the pay and display and buy another two hours. After breakfast, we did visit the magnificent Church of St. John Baptist, the largest of the region’s medieval “wool churches,” just down the street. The Corinium Museum and Cirencester’s important Roman past, however, would have to wait this time.

I followed the A429 north this morning on one of the Cotswolds’ most popular and iconic tourist routes, replete with gorgeous landscapes and pretty towns. We stopped at painfully picturesque Burton-on-the-Water, where the gentle River Windrush flows right down the middle of the High Street, and detoured through the rural villages of the Slaughters to Stow-on-the-Wold.

Just above Moreton-in-Marsh, we passed the county line into Warwickshire, which advertises itself as “The County of Shakespeare.” Another half hour’s drive had us in the Bard’s hometown of Stratford-upon-Avon.

Day 6 - At Play in Stratford

Bustling with visitors as always, Stratford capitalizes on its fame in flamboyant fashion. We happily did the tourist route, visiting Shakespeare’s birthplace, Waterside and the Royal Shakespeare Theatre and the great writer’s grave at Holy Trinity Church. No visit to Stratford would be complete for me without hoisting a toasting pint at the actors’ pub near the theater, the Black Swan, better known as the Dirty Duck.

Day 7 - The Western Cotswolds to Bath

Today we routed south again along the Cotswolds escarpment, this time via Broadway, Painswick (with its unique churchyard of 99 topiary yews) and Stroud to the historic city of Bath, where, as I’ve often used the phrase, Jane Austen meets the Romans. If there is one provincial destination in Britain worthy of the year-round popularity with visitors, it is Bath. The Discovery of its hot springs by the Romans led to it being developed into the Roman province’s premier R&R destination in the 2nd century. They left behind the most extensive complex of Roman remains in the island.

In the 18th century, the same hot springs were popularized for their therapeutic bathing and drinking benefits, and, lo, Bath Spa became the social gathering spot in England during the late 1700s. The Georgian city bloomed with Palladian architectural glories – residential crescents, shopfronts and public buildings – that give the city its elegant Neoclassical appearance to this day.

It is a full day to see majestic Bath Abbey, the Roman Baths and Pump Room, and then climb Milsom Street to the Assembly Rooms, the Circus and the Royal Crescent. At #1 Royal Crescent, do visit the Georgian townhouse, decorated and furnished as it would have been at the time.

We also pottered about at the city market in the Guildhall, wandered from Pulteney Bridge along the Parade Gardens and explored the warren of arcades and alleys around Northumberland Place. I took my pint each evening at The Saracen’s Head, where Charles Dickens wrote parts of The Pickwick Papers 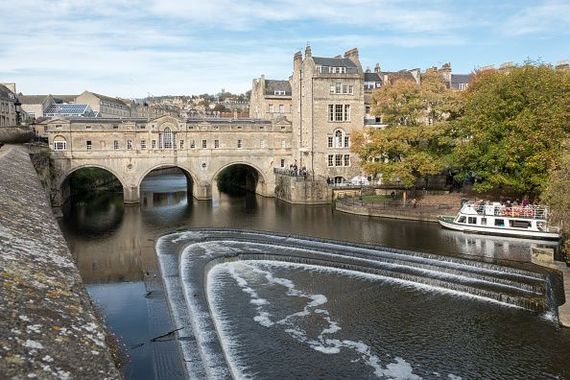 Day 9 - The High Road to London

Whenever possible, I avoid the motorway and take the Old London Road back to metropolitan London. That’s the A4. The old mile markers still stand in some places as the road threads through Chippenham, past the massive henge at Avebury and through Marlborough College (where Kate Middleton went to school). At Hungerford, we rejoin the M4 as London begins to loom ahead.

Of a few days in London, I never write. You have most likely been yourself, and been reading Sandra Lawrence’s column for years. On the last afternoon, however, we met up with Sandra and veteran BH writer James Graham for a long lunch at the historic Mayflower Inn in Rotherhithe. But that’s another story.